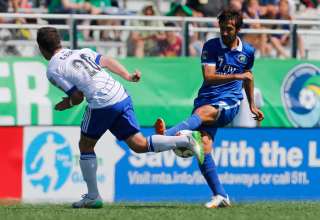 2015 in New York
FCE's Chad Burt tries to get in the way of Raul's shot attempt. PHOTO: NEW YORK COSMOS

Before the Eddies departed for New York, midfielder Lance Laing spoke about the team’s continued struggles in the early stages of games.

“We’ve just got to park the bus for the first few minutes,” he said. “We’ve got to be like Chelsea.”

Instead, on Sunday, the Eddies continued their baffling propensity to surrender goals right after games kick off. This time, it was Cosmos Carlos Mendes who benefitted from the charity provided to him by the Eddies’ back line. He poked the ball across the line just 1:25 after the game started.

Crazily, that marks only the fourth quickest goal the Eddies have given up this season in NASL or Canadian Championship play. That’s right. Even though the season began in April, the Mendes goal is only at No. 4 in the quick-goals chart.

But, while the Eddies have been able to come back in many games this season, this time the Mendes goal would simply the harbinger of many more to come, as the Cosmos pleased the home fans with a wild 4-2 win.

If anything, the defensive holes today showed just how much the Eddies’ change when captain Albert Watson is out of the lineup. He had to leave last weekend’s draw with Minnesota to injury — and the back line was a totally different crew without him. And it will strike fear into the Eddies’ supporters hearts to know that their favourite team could be playing without Watson when they head to Vancouver on Wednesday for the first leg of the Amway Canadian Championship semifinal.

FCE coach Colin Miller said his team “was in la-la land” on the defensive side of the ball.

“From the attacking point of view, I’m very pleased, we created some very good chances and could have had more [goals]… But from the defensive point of view, not good enough at this particular venue against this team.

Traditionally, Cosmos/FCE matches are defensive struggles. Not this time. Off a short corner right after the opening kickoff, the hosts were able to work the ball to the far post to Raul, who dinked a short corner across the box for striker Lucky Mkosana. The ball was headed down, and FCE keeper Matt Van Oekel scrambled to palm the ball away. He pushed the ball right to the feet of Mendes, who simply had to poke the ball into the open goal.

But the Eddies got a break just before the 20-minute mark. Mendes was ruled to have tugged on the Eddies’ Kareem Moses in the penalty area, and the referee pointed to the spot. Tomi Ameobi converted the chance into the top corner, and it looked like the soccer gods had evened the score. Last, a soft penalty was called against the Eddies that allowed Minnesota United to leave Edmonton with a draw. Certainly, the call that the Eddies got in their favour on Sunday was up for debate.

But the Cosmos soon made the debate moot. Raul didn’t look like a man in his late 30s; playing in a deeper role with the Cosmos than he did in his glory years with Real Madrid, he sprayed passes around the pitch with an air of confidence. The Eddies chased shadows as the Cosmos played keep-away for long portions of the game.

Raul would give the Cosmos the lead. Mkosana brought the ball down the left wing and sent in a low cross for Danny Szetela; the ball crashed off the underside of the bar and stayed out. The ball fell to Szetela, who then hammered a volley off the bar. Two crossbars in a row — was fate intervening on the Eddies’ behalf? Well, not exactly; Raul took advantage of Moses, who had taken his eye off the play to make a protest towards the linesmen for an offside call. Raul took the rebound off the second shot to hit bar, and then fired the ball into the goal. Would Moses have got to Raul? Tough to say, but the defender has to play to the whistle.

Then, to pile on to the Eddies’ tough first half, Van Oekel came off the line to try and get to a free kick launched into the box; his route was off-line and he was late. Mendes got to the ball well before Van Oekel and headed into an empty goal.

The second half started as badly as the first had ended. Cosmos midfielder Leonardo Fernandes split the centre backs with a pass for Mkosana, who was played onside by right back Eddie Edward, who wasn’t near the play. With acres of space and tons of time, Mksoana got his second.

Van Oekel did make an excellent diving stop on substitute Sebastian Guenzatti and Ameobi, the liveliest Eddie on the afternoon, did make an excellent run down the right side before cushioning a pass that set up Ritchie Jones’s late consolation goal. But emergency left-back started Allan Zebie — moved into that spot so Jones could move to centre back to fill the Watson void — had to leave the game in the second half with a hamstring problem.

With defensive injuries are a concern, the Eddies will have their hands full playing on the road Wednesday to one of MLS’s most potent home sides. But, they need to focus on surviving the first two minutes.