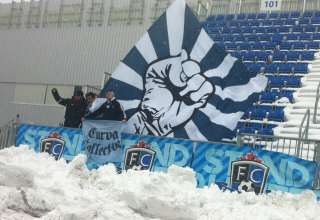 Three Whitecaps supporters who made the trip from Vancouver decided to visit Clarke Field on Wednesday.

Three Vancouver Whitecaps supporter ran onto the snowy field. They dodged snow-removal vehicles and then unfurled a bright blue and white banner, with a fist in the middle.

It would only be a symbolic gesture of defiance, as the visit was the only act that hinted that a soccer game was supposed to be played at Clarke Field on Wednesday.

After referee Dave Gantar deemed FC Edmonton’s home pitch unplayable, officials from the Canadian Soccer Association, FC Edmonton and the Whitecaps unanimously agreed to postpone the first leg of their Amway Canadian Championship semifinal, which had been set for Wednesday night. The Edmonton leg, now set for May 20, will be the second leg of the series. The Whitecaps still host a match on May 13, but it will now be the first leg, not the second.

Snow began to fall late Tuesday night in Edmonton. And, though forecasters had originally predicted it would peter out by the morning, it kept coming. It was heavy, wet snow, too. At 2 p.m. Wednesday, the call was made to scrub the game.

FC Edmonton General Manager Rod Proudfoot said that, even if the field was cleared, the turf underneath was soaking wet. With temperatures expected to be below the freezing mark by Wednesday night, the fear was that the field would become icy.

He said “the weather was not going to be much better” Thursday morning, so playing the game the next day at noon was out of the question. He said the decision to postpone and reschedule to the 20th was “unanimous.”

“When the studs start to pack underneath with snow, it becomes dangerous.”

Miller said he won’t change his approach towards the series, even though the Eddies now have the advantage of the second leg at home.