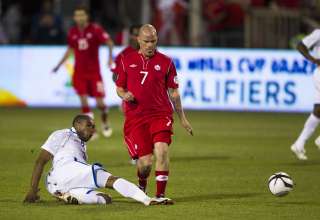 On the one hand, Canada’s domination of Honduras on Tuesday is a good sign for our national team’s prospects, given that Honduras went into the second round of CONCACAF World Cup qualifying as the favourites in Group C.  The flipside of the 0-0 result at BMO Field, however, is that the Canadians may have missed a golden opportunity to elevate themselves.

“These are the games you have to win and we didn’t win it,” said captain Kevin McKenna.  “It’s an OK result but we’re disappointed we didn’t win.  It’s games like this that get you qualified for the next round.  Let’s hope we don’t look back on this game and rue the two points we didn’t get.”

Through layman’s eyes, Canada looked like the side coming off a World Cup appearance as they outshot Honduras by a 12-6 margin and held Los Catrachos without a single shot on goal.  Canada recorded clean sheets in five of six matches in the first round of World Cup qualifying and now have back-to-back shutouts to begin their second round, following Friday’s 1-0 win in Cuba and the Honduras draw.

Still, the Canadians find themselves two points behind unbeaten Panama in the Group C table, with Honduras on the board with one point and Cuba with none.

Had Canada managed just one goal against Honduras, they would’ve been level with Panama heading into September’s showdown in the next set of qualifiers.  Panama visits Toronto on Sept. 7, with the return fixture in Panama City on Sept. 11.

Canada was in good form virtually from the opening whistle on Tuesday, controlling Honduras through the first half and generating pressure.  The second half saw Canada get several quality chances, many of which were generated by Dwayne De Rosario finding loads of space on the left side for crosses to the front of the net.

Atiba Hutchinson was also a force, creating havoc in the midfield and keeping defenders honest by challenging for every long pass.  Hutchinson was in the Starting XI in place of Tosaint Ricketts, the only tactical change from Canada’s lineup against Cuba (Milan Borjan got the start in net thanks to Lars Hirschfeld’s red-card suspension).

Canada’s best chances, however, came from set pieces.  David Edgar’s header off a corner went only inches wide in the 68th minute, and both Edgar and McKenna headed corners during stoppage time that barely missed the mark.  Between these missed corners and a few less-threatening free kick attempts, Canada just couldn’t capitalize on the dead-ball plays.

“We’ve got to score goals,” McKenna said.  “You can’t win soccer games if you don’t score goals and that’s our biggest problem… If you get at least three chances, you have to bury one.”

Edgar’s final header attempt came on the game’s very last play, drawing groans from the 16,132 fans at BMO Field.  While Honduras was well-represented with pockets of fans in the stadium, it was largely a pro-Canada crowd, with the noise reaching a crescendo during the final moments of stoppage time.  It was a welcome bit of home-field advantage for Canada at a venue that often seemed like an away pitch during the last round of World Cup qualifiers in 2008.

“They [the fans] were fantastic,” said head coach Stephen Hart.  “That’s what we need.  That little push at the end they almost took us over the top.  I’ve got to thank them.”

Hart predicted that 12 points would be necessary to finish amongst the top two of Group C and advance to the CONCACAF hexagonal stage.  With four points through two games, Canada is meeting their coach’s pace, but Hart felt that the lack of a goal obscured the Canadians’ overall good performance.

“I’m not happy with the point.  I thought we moved the ball well but…at times the final pass was missing,” Hart said.  “I thought we should’ve come away with [more] from the game, in terms of getting three points.”

Hart felt the result was fueled both by his team’s strong play and Honduras’ lacklustre performance, with the coach expressing surprise that Honduras delivered so little of an attack.  With Honduras struggling thus far in qualifying, it leaves a vacuum at the top of the group that, based on Tuesday’s showing, the Canadians are capable of filling.

“I thought they were going to be better since everyone was talking Honduras this and Honduras that,” said Borjan.  “But they came out and we were dominating the whole game almost.  They were a little bit lucky since they got a point from here.”