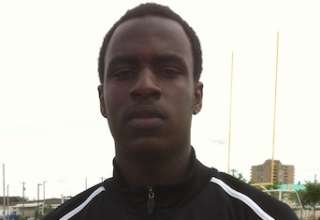 Ex-TFC Academy fullback Dino Gardner isn’t going to get much time to acclimate to his new club.

The “trialist” tag was removed from Gardner Wednesday, as FC Edmonton announced the right back has been inked to a one-year deal with an added option year. Because the Eddies are so short on defence due to injuries — forward Matt Lam and midfielder Chris Kooy played as emergency defenders in Sunday’s 1-0 win over Fort Lauderdale — Gardner will be on the plane Thursday, as the team leaves for Florida ahead of Saturday’s return date against the strikers. Normal starting right back Antonio Rago, who was red carded last Sunday, is suspended for Saturday night’s match.

Gardner made the decision to leave TFC Academy in 2011, at the same time that teenage sensation Keven Aleman made his decision not to sign a promissory note to remain with the club.

Gardner said he simply knew there wasn’t a path for him at TFC to make from the academy to the big club.

“I think I was going to get a chance with the first team,” he said Wednesday after FCE’s training session at Clarke Stadium.

Without a club, Garnder was invited to the Canadian U-20 camp last winter. And he said that the brain trust of the Canadian program, U-20 coach Nick Dasovic, U-23 coach Tony Fonseca and national men’s coach Stephen Hart, helped facilitate a trial at FC Edmonton for Gardner. He was then invited back over the last couple of weeks, and got the contract on Wednesday.

FCE director of soccer operations Joe Petrone said the deal had to be done in time for Gardner to join the team for the upcoming road trip — because the Eddies are so short in defenders.

So, far, Gardner likes what he sees, and he’s enjoying being immersed in coach Harry Sinkgraven’s 4-3-3 system.

“It’s been a real challenge for me, a lot of new things to learn,” said Gardner. “I am learning Harry and (assistant coach Hans Schrijver) Hans’s Dutch system, and they are challenging me to do a lot of things that I have never done before.”

And, the transition to the new club has been helped by the fact that Gardner knows a lot of FCE’s players from national-team programs or the Toronto soccer scene. Striker Michael Cox, attacker Kyle Porter and keeper David Monsalve have all helped the young defender transition to his new club.

“I am going to try to get forward and help with the attack,” said Gardner. “I am focused on trying to help this team get three points in the next game.”

FCE still has four open roster spots it can use.