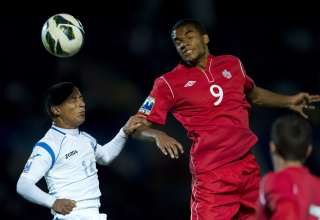 A Canadian qualification for a FIFA under-20 World Cup for the first time since 2007 is now tantalizingly close.

Canada’s youngsters advanced to the quarterfinals of the 2013 CONCACAF under-20 championship with a overpowering 5-1 win over Nicaragua Friday night in Puebla, Mexico.

The win sets up a dream match against the United States on Tuesday.

Samuel Piette scored early and Caleb Clarke led the way as Canada was in no real danger from the Nicaraguans who had a man sent off in the prelude to Canada’s third goal of the night.

“We got the result we wanted in the first half. Unfortunately for Nicaragua they got the man sent off,” head coach Nick Dasovic said in his post-match press conference. “We were quite comfortable at 3-0 and obviously with the penalty at halftime they made it 3-1 but with a man down it was always a difficult task for them.”

As the Canadian players filtered out to the team bus after the game, their faces lit up when they were asked about the prospects of playing the U.S. for a spot in the World Cup.

Canada beat the Americans recently in a tournament in Spain and, at all age levels of men’s soccer, have been unbeaten in four games. Canada’s enjoyed the upper hand with two draws at the senior level and the win at Olympic qualifying last year and the U20 win the last time the two teams met.

“It’s going to be great. They’re our rivals so everyone’s going to be psyched,” said Clarke, who converted Ben Fisk’s corner kick in the first half and John Dollery’s cross in the second. “I’m pumped for the game. I think it will be a really great game. We beat them already in Spain and I definitely think we can beat them again.”

Piette’s goal six minutes in looked like it was right off the training ground as Dollery laid it into his path for him to smash from 25 yards away.

Before a half hour was up, Clarke had tapped in his first and Canada was cruising.

The advantage was only amplified when Nicaragua’s Christian Gutierrez was given a second yellow card in handling Samuel Piette’s long-range effort that Mauro Eustaquio promptly dispatched.

Nicaragua got its goal after a sequence of puzzling officiating decisions.

First, no action was taken after a Nicaraguan player seemingly struck Alessandro Riggi in the face. It’s a cut-and-dried FIFA rule that raising your hands to an opponent’s face merits an automatic red card.

What followed was at best, a soft penalty on Piette. Piette said the Nicaraguan player dove.

“I caused the penalty. I was marking him and I was standing right there and he dove,” he said with a small smile. “I give him 10 on 10 on the dive but things happen and fortunately we won the game.”

Canada came out for the second half and were running all over their Central American counterparts and playing with some flare as well.

Eventually the fourth goal came when Clarke converted Dollery’s cross from the right side and the three-goal advantage was restored.

“Fantastic crosses by (Fisk) and (Dollery),” said Clarke who looks like he may one day be the goal-scorer the senior side has lacked for a long time. “They were great crosses on a silver platter and all I had to do was pass them in.”

Clarke was down grabbing his head in the lead-up to Canada’s last goal. It was perhaps a good thing that the referee didn’t stop the play as perhaps he should given that it appeared to be a head injury but Ben McKendry capped off the scoring play with about 25 minutes to go.

After Canada’s opening-game loss to Cuba, it was the general consensus that Keven Aleman was Canada’s best player. He could have scored in the first half but missed on his breakaway so there may have been some surprise when he was starting on the bench and never played.

Dasovic put to bed any theories for the omission by saying it was simply his call to make.

“I felt that Dylan (Carreiro) has been doing well in training and he looked sharp. We gave the kid a chance and to be fair he had a good game today. Everybody’s going to get a chance to play or not to play and again it’s a coach’s decision on how we’re going to work for it.”