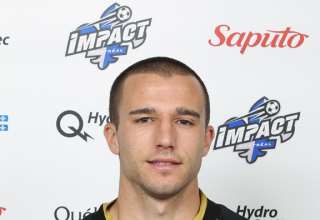 The first half featured several chances by both sides as the momentum went back and forth as the play unfolded. The visiting Strikers got what proved to be their best opportunity six minutes in but were thwarted by goaltender Evan Bush who, replacing injured first-stringer Bill Gaudette, punched the ball off a Paulinho Le Petit effort over his crossbar for the first of five saves he’d make in the opening half on his way to his first clean sheet of the season.

Montreal striker Mignane Diouf, the offensive standout for the home team, got his side’s first good chance in the 12th minute. After two drives up the right side ended fruitlessly, he charged up the right flank and drove the ball past goalkeeper Matt Glaeser. Defender Martyn Lancaster caught up to it within inches of the goal line to keep the Impact off the sheet.

“I feel good about today’s game. It’s great to get the shutout but we have to find a way to score and ultimately get a better result,” said Evan Bush, voted Impact player of the game.

Montreal has only two wins in 11 NASL matches, both triumphs coming over FC Edmonton. Head coach Marc Dos Santos characterized his team as anxious a, situation he claimed results from wanting to play well in front of the home crowd.

“We know where we are in the standings and we want to climb up from there so badly that we don’t always handle our emotions as well as we’d like to,” he said. “They fought hard today. In the first half we often had room between their central defenders and midfielders. We were able to find and get the ball to Idriss( Ech Chergui), Antonio (Ribeiro)and (Anthony) Le Gall but instead of running with the ball to gain some ground we’d make a play immediately and leave Diouf all by himself in front instead of supporting him as well as we should have.

“We did that a lot in the first half and I think that once Reda (Agourram) came in we were a little more dangerous.” he continued.”It’s something we’re going to have to talk about because sometimes we put everything on Diouf because he’s so fast and so dangerous. The first thing we do is look for him but we have to have some variety to our game.”

The Impact’s have eight days before playing FC Edmonton next Sunday, time Dos Santos says will be put to use on the practice field in the hopes of taking Montreal to a third straight victory over the surprisingly successful first-year organization, presently in second spot in NASL standings.

Midfielder Leonardo Di Lorenzo became the 11th player in Impact history to play over 10 000 minutes with the team.

Goalkeeper Jason Beaulieu, defender Karl Ouimette and midfielder, Wandrille Lefevre, all from the Impact’s U21 team, dressed for today’s game but did not see action.

After playing seven of their first 10 on the road, the situation reverses itself and the Impact will perform in front of Saputo Stadium fans in eight of its next 11 outings.

The Strikers captain, Aaron Hohlbein, was named NASL Defensive Player of the week on Monday while goalkeeper Matt Glaeser was leading all NASL keepers going into today’s match with a minuscule 0.60 goals-against average.