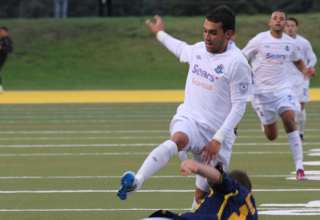 FC Edmonton midfielder Shaun Saiko hopes that he can appeal the second yellow card he received in Saturday’s 1-1 draw with the NSC Minnesota Stars.

The red card would see him miss next Sunday’s home date with the Montreal Impact, who FC Edmonton, currently second in the NASL standings with a 6-4-2 record, hasn’t beaten this year. The Impact has outscored FCE 7-0 over two games.

“I definitely would want to appeal. We want to look at the replays, and see what we can do from there.”

Saiko, who scored the opening goal of the game early in the first half after he pounced on an Antonio Rago throw-in that eluded a couple of Minnesota defenders, got his first yellow for a hard foul. After Minnesota’s Neil Hlavaty tied the game on second-half penalty, Saiko took on two Minnesota defenders in the box and went down. He was given a second yellow for what the official deemed a dive.

“I couldn’t have done anything about it,” said Saiko.

In fact, when the whistle went, Saiko thought he had won the penalty, and that FCE would get the chance to win the game in Blaine, Minn.

“Because the call was made so fast, when the whistle went I thought the referee was going to call the penalty. He produced the yellow card so fast. It was ridiculous, really.”

Just minutes before the Saiko call, FCE left back Alex Surprenant was judged to have brought down Hlavaty, who then converted the spot kick.

Even though Saiko scored early and Dan Antoniuk struck the cross bar with a volley right before the stoke of halftime, FC Edmonton coach Harry Sinkgraven wasn’t pleased with his team’s effort in the first half.

“Is a draw on the road a satisfactory result? Yes. Am I satisfied with our performance? No. In the first half, our lines weren’t close enough to each other. We weren’t marking well. Yes, we scored and hit a post and crossbar, but we could have been a better.”

But, Sinkgraven said the second half was decided by the two calls.

“The referee was also very important. The call against us wasn’t a penalty. It happened outside the box, and Alex didn’t make contact. And then the red against Saiko, it definitely was a penalty on that.”

But, for FCE, this marked the third game in an eight-day span, which saw the second-place club face all of its major rivals at the top of the table, getting a win, a draw and a loss.

“You have to mention that we played clubs one, three and four in one week,” said Sinkgraven.