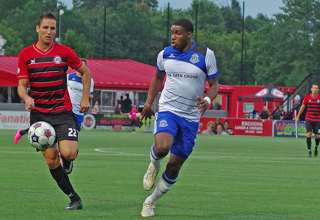 In a defensive battle, a single moment of brilliance can make the difference.

With 10 minutes left Saturday’s match between Atlanta and FC Edmonton, Silverback Junior Burgos came up with that moment of magic. He hammered a free kick from distance just inside the post to give Atlanta the 1-0 win.

Yup, in case your wondering — and you have a killer mind for trivia — that’s the same Efrain “Junior” Burgos who made two appearances for Toronto FC in the 2012 MLS season, playing a total of 11 minutes.

“It was the difference in the game,” said FC Edmonton coach Colin Miller. “We gave up a stupid free kick in a dangerous area. I had warned the guys that they [Atlanta] had players who are dangerous from those places. And that’s what happened. Look, Burgos is a very good player, Atlanta is a good side. We would have been happy with a point here on the road, I think at one point Atlanta would have taken a point. I think it was a very even game, once we came to grips defensively with the game after 10 or 15 minutes, I think Matt [keeper Matt VanOekel] has had to make maybe one save from distance.”

Atlanta created just three golden chances over the 90 minutes; and Burgos came up trumps on chance No. 3.

The other two? In the first half, Silverbacks’ forward Jaime Chavez got behind the back line and looked to heading towards Eddies’ keeper Matt VanOekel for a one-v-one chance. But left back Allan Zebie, in for Johann Smith, dashed back and made a perfect sliding tackle to take the ball off Chavez’s feet. In the second half, off a corner, the ball came off Pedro Mendes’s head, took a bounce off the Atlanta turf, and then came off the post. To be fair, it didn’t look so much like Mendes intended to head the ball; the cross, which came over heavy traffic, looked to have caught him by surprise and come off his head.

But, for the Eddies, the concern will be that they were shut out for the second game in a row. And, the Eddies didn’t do enough to trouble Silverbacks’ keeper Steward Ceus on Saturday night. In the first half, Ceus was called on to make two very good diving saves. On the first, he stopped an attempt from Sainey Nyassi, who regained his starting right-wing spot, with Dustin Corea dropping to the bench. Then, before halftime, Lance Laing’s screwball of a long drive forced Ceus to drop to the turf.

The visitors, though. didn’t launch a dangerous shot towards goal in the second half.

Midfielder Thiago de Freitas, who was subbed out of last week’s 2-0 loss to Fort Lauderdale, also wasn’t on the trip. He pulled his hamstring in training this past week. Smith being left in Edmonton was  coach’s decision And Miller was forced to take out midfielder Ritchie Jones at halftime in Atlanta; the coach said Jones had a thigh strain.

Miller will have some more headaches next Sunday when the Eddies host Minnesota, the highest-scoring team in NASL. Laing will be away on World Cup qualifying duty with Jamaica. Nyassi is on the 30-man roster for Gambia’s African Cup of Nations qualifier. He will find out over the next couple of days if he’s on the main roster.

“We’ll be without Laing, likely Nyassi and maybe even Jones,” said Miller. “That means the club will need to use all of our resources available to us.”