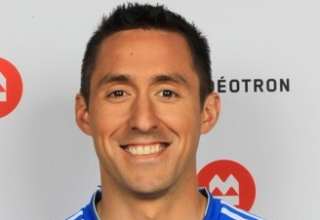 A nearly full house of 58,912 fans, the most to ever turn out for a pro soccer game in Montreal, showed up for the Impact’s MLS home opener at Olympic Stadium, with very few of them returning home disappointed after seeing their team put on a solid performance against the visiting Chicago Fire.

Getting out to a lead in the early minutes of the second half and relinquishing it towards the 70-minute mark, the Impact made sure the resulting 1-1 score stood for the balance of the game, although it came close to victory as the match drew to a close.

The pregame ceremonies served as a reminder that locals like locals, with Brossard native Patrice Bernier getting the loudest and most prolonged acclaim from the highly partisan crowd during player introductions.

Dominating both the play and possession time in the opening half Montreal, in an effort to promote balance and consistency, fielded the same starting 11 as it did in last Saturday’s season opener in Vancouver, showing that a week can make a big difference in a team’s performance, particularly early in the season.

The Impact’s defence was much more alert, led by Tyson Wahl, a bit of a goat last week against Vancouver, playing hermetically in the opening 45, turning the ball back up the pitch on several occasions and always seeming to be in position to thwart the oncoming Fire. A standout at midfield, Justin Mapp smothered balls and supported the attack, moving the ball up-field and feeding the Impact forwards who made life difficult for Chicago keeper Paolo Tornaghi.

Justin Braun and Sanna Nyassi each took a pair of first-half shots at the net. Braun, who was replaced by Bernardo Corradi late in the game, finding the back of the net in the 35th minute but had his marker called back on an offside. Braun came close in the 18th minute but his drive was deflected over the crossbar.

The visitors’ best chance came from a Patrick Nyarko attempt but the Ghanian striker’s try went wide to the left of Donovan Ricketts’ goal. Chicago picked up the only yellow card of the half, awarded to Sebastian Grazzini for his 42nd minute tackle on midfielder Bernier.

Visiting the press box at half time, MLS commissioner Don Garber declared himself more than satisfied with the celebratory mood at Olympic Stadium.

“This is another very, very special day for soccer in Canada and certainly for Major League Soccer,” he said. “As expansion clubs come along they sort of outdo each other. I didn’t expect we’d have 58,000 people here when we started in Montreal. They’re very spirited and knowledgeable.”

Fifty-six minutes into the game, Montreal captain Arnaud recorded the Impact’s first MLS goal, sending the crowd into hysterics and putting his team up a goal as he headed home a Nyassi cross.

Fifteen minutes later, the second half of the Fire’s Ghanian tag-team up top left his mark on the game when Dominic Oduro buried a volley from Grazzini in the 71st, leaving the pitch briefly afterwards to have his left forearm attended to by team trainers.

Other Montreal chances came as the game drew to a close. Nyassi, who showed good speed again today, got a shot in the 86th minute but it was stopped by Tornaghi. He also put one over the bar in the first minute of extra time and, moments later, Josh Gardner hit the crossbar.

Coach Jesse Marsch was pleased with his men’s efforts and the result they obtained although there is always room for improvement. “Overall, I feel there were a lot of good individual performances and as a group it’s a fairly good night for us,” he said.”We got the lead. It might have been nice to hold onto it for a while longer and get a second goal and then see if we could challenge them.

“The crowd was great tonight and the men really enjoyed playing in front of them. A couple more breaks and maybe we come away with three points instead of one.”

Bernier said that the atmosphere, playing in front of such a large and supportive crowd was “great” and went on to say it was “too bad we couldn’t come away with a win. We had a lot of chances and they only had a few but they managed to tie it up.

“After scoring a goal teams sometimes let up a little. You could tell that they are an experienced team because they didn’t panic after going down a goal. That’s something we’re going to have to work on throughout the season,” he continued.

Captain Arnaud, who goes down in legend as the first Impact scorer in MLS, said that he’d remember the goal and offered, “I think we’ll all remember it, the whole club will,” before going on to talk about the advantages of adversity. “In tough moments in real games you learn more about each other. We’ll continue to do that and we’ll get better but this was an important moment for the club.”

Montreal plays their next three games on the road, in Columbus, New York and Salt Lake City before returning to Olympic Stadium to meet their other Canadian rival, Toronto FC, on April 7.

• Three Montreal players have appeared in more than 100 MLS games, Davy Arnaud (241) Justin Mapp (222) and Shavar Thomas (170) while Matteo Ferrari, Patrice Bernier and Andrew Wenger made their league debuts last week in Vancouver while Bernardo Corradi made his this afternoon.