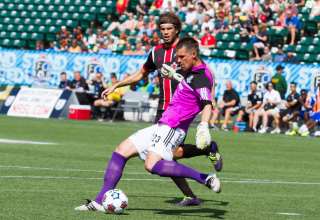 The irony can’t be lost on FC Edmonton supporters.

On Saturday morning, just hours before the Eddies open their 2015 NASL season in Jacksonville, came confirmation that goalkeeper John Smits will go on a temporary loan to the Montreal Impact, where he is expected to be Evan Bush’s deputy when the MLS side takes on Alajuelense in the second leg of their CONCACAF Champions League semifinal.

Smits — who won the NASL Golden Glove last year for posting the best goals-against average in the league — will leave for Costa Rica after the Jacksonville match. His loan only extends to April 8, so he will be back in Edmonton for the April 12 home opener vs. Carolina.

Of course, Smits was the keeper who was beaten by Patrice Bernier’s decisive 96th-minute penalty kick in the second-leg of the 2014 Amway Canadian Championship semifinal. Had Bernier not scored, the Eddies would have upset the Impact — and there would have been no Montreal run to the semifinals of the CONCACAF Champions League. Looking back, it’s hard to argue that any team has given Montreal as hard a time as Edmonton did on this run to the CCL semis. That penalty came in the sixth minute of stoppage time, and was the result of a controversial call. In fact, last year, Edmonton players and coaches often told me how hard it was to watch Montreal’s win over Toronto FC in the final, because the loss stung that much.

But, even before the arrival of Colin Miller as the Eddies head coach — and the man who makes the roster decisions — there existed a spirit of cooperation between the Impact and Eddies. In 2012, midfielder Bryan Arguez was loaned to the Eddies by the Impact.

And, at the end of 2012, FCE midfielder Shaun Saiko was scheduled to join the Impact for its tour of Italy — and was set to move to the MLS side on a permanent basis. But, as he revealed in Issue 5 of Plastic Pitch (out now, see below for details on how to get the mag), that deal fell apart at the last second.

But, while Smits isn’t expected to see the field in Costa Rica outside of training sessions, maybe the call-up to an MLS side — even a temporary one — will do something to attract the attention of Canadian national-teach coach Benito Floro, who has so far refused to give the keeper a look.