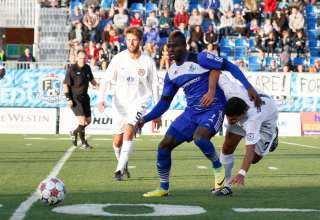 FC Edmonton have won two Voyageurs’ Cup matches at Clarke Stadium. But in NASL play, “home sweet home” isn’t a phrase the Eddies can use.

The Eddies remain without an NASL point at home, after losing 2-1 to the Atlanta Silverbacks on Saturday.

Earlier this season, the Eddies lost to Fort Lauderdale in the cold and snow — which should have offered FCE a massive home advantage. Again, on Saturday, the Eddies got a massive boost from Mother Nature. The game started at 7 p.m. local time. But, due to the long Alberta spring daylight hours, Atlanta’s keeper and defenders were forced to look directly into the bright sun for most of the second half. The sun doesn’t set in Edmonton until about 10 p.m. at this time of year, so the Silverbacks had to stare into the western glare — and counting the number of players shielding their eyes, it was definitely uncomfortable for them.

But, thanks to the brilliance of Ghanaian Kwadwo Poku, some very poor FCE defensive errors and some chances that the Eddies left begging, it was the Silverbacks who ensured that NASL opposition remains perfect at Clarke Stadium this season.

Three home NASL matches for the Eddies — and three losses.

“We had fire, we really played for each other,” said Atlanta assistant coach Ricardo Montoya, who dedicated the win to head coach Eric Wynalda, who doesn’t always travel with the Silverbacks as part of the team’s unique management arrangement.

And Montoya could be proud of Poku, a prospect the Silverbacks brought to NASL from NPSL. Montoya described Poku as a project player — dangerous offensively, but still needing to work on his game away from the ball.

But Poku scored the 80th minute winner, and set up Atlanta’s opening goal. He was dangerous throughout the second half.

The winner came just three minutes after former Silverback had levelled the score for the Eddies. Eddie Michael Nonni went down the right wing, got into the Atlanta penalty area, and lost the ball to Atlanta’s Junior Sandoval. It was a clean tackle, but Nonni remained down (and later had to be subbed off). FCE, for all intents and purposes, was reduced to 10 men. Poku got the ball on the left wing, beat Eddies’ defender Albert Watson to the top of the area, then dashed into the middle of the penalty area — with no other Eddie able to get close to him. With time to pick a corner, Poku did just that.

“It was criminal,” said FCE coach Colin Miller. “You have a one-v-one in the 18-yard box, and then you go and give up a goal like that, you don’t deserve to win.”

Atlanta opened the scoring early in the second half. Defender Kareem Moses gave the ball away at midfield, which led to a quick Atlanta attack. The ball came to Poku, who had his shot blocked by Moses, who had scrambled to get back into a defensive position. But the carom fell to Atlanta’s Jaime Chavez, who smashed his effort home.

Moses was in, replacing centre back Mallan Roberts, who began serving his two-game suspension Saturday. Roberts was sent off for kicking an opponent in the face last week in San Antonio.

But while Edmonton defended gamely last week in San Antonio to get a draw, that defensive shell was nowhere nearly as tough on Saturday.

The Eddies got some hope in the 77th minute. A minute after coming on as a sub, James was able to get a low cross from Lance Laing. James got the outside of his boot to the ball, and directed it into the corner.

While the game finished 2-1, the Eddies will lament the number of times they had great looks on goal, but allowed Atlanta and El Salvador national keeper Derby Carrillo off the hook.

• Nonni dashed around Atlanta left back Mike Randolph early in the first half, but couldn’t beat Carrlllo;

• After Frank Jonke nodded a ball into his path, Nonni had his close-range shot deflected wide by Randolph;

• Jonke had a chance to beat Carrillo from close range, but the keeper came well off his line to block the shot with his legs;

• FCE’s Daryl Fordyce had Carrillo at his mercy, but put a shot towards the centre of goal where Carrillo and Atlanta defender Bobby Reiss could clear the shot off the line.

So many great looks, but FCE couldn’t pick corners. Shots were going right at Carrillo; that’s part credit to the keeper, but the finish wasn’t there.

Compare that to Poku, who got a good look at goal, picked a corner, and won his team the game.