January 21, 2022
9 New Articles
Home Canadian Soccer Men's National Team De Guzman says that when he’s replaced by a young Canadian, it will be a sign of national-team progress 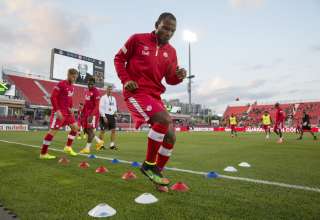 The world of sports is filled with stories of veterans trying to hang onto their starting jobs, trying to hold off the hungry young pups from taking their spots.

For Canadian national team midfielder Julian de Guzman, nothing will tell him that Canada’s on the road to soccer recovery than when coach Benito Floro tells him that it’s time to let a kid take his spot in the centre of midfield.

It’s not that de Guzman wants to leave the Canadian program; anything but. He says it is still an honour and a pleasure to represent the country. He says that he would love to keep playing, “as long as my legs hold up.”

But, at 33, he understands that he shouldn’t be the surefire first choice to start for Canada in the middle of the park. And he won’t be disappointed when Floro says that a young gun like Bryce Alderson, Kyle Bekker or Samuel Piette will be taking his place.

De Guzman says that going to Russia in 2018, because Canada qualified for the World Cup “would be a dream come true.” But he said if Canada did make the cut and his legs didn’t hold out, he’d also be happy to be there in some kind of supporting role; coach, adviser.

“Representing my country is always an honour and a privilege.”

De Guzman and fellow veteran Atiba Hutchinson are the elder statesmen in Canada’s squad that is currently holding camp in Austria. Canada scored its first goal in 14 months when it drew Bulgaria 1-1 last week; a penalty kick from Hutchinson ended the drought. Canada will finish the camp Tuesday with a match over Moldova.

With Floro bringing in so many young players, de Guzman said it’s “like a new team that I’m involved with.” But he said the professionalism that Floro is bringing to the program is helping the men’s team turn a corner. He said the feeling around the team is like it was from 2007 to 2009, when Canada was a Gold Cup contender. The game against Bulgaria was an example; even though Canada went down 1-0 early, it fought back.

“Regardless of the goal against us, we were still disciplined, still organized.”

Can Canada make it goals in consecutive games when it face Moldova Tuesday?

“The best way to end camp, the finishing touch, would be getting a result against Moldova,” said de Guzman.

And don’t use the word “friendly” to describe the game. Don’t call it meaningless.

And, soon, he’ll be happy to see a young midfielder taking the lessons he’s learned and applying them so the Canadian national team can have a better future.