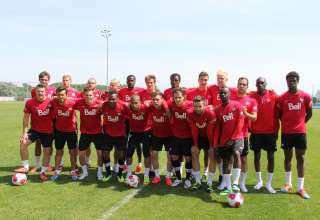 Canada didn’t win the game, but the men’s national side earned a moral victory. For the first time in 14 long months, Canadian soccer supporters could celebrate a goal scored by the men’s national side. An actual goal. In case you’ve forgotten what a goal is — and how could we blame you — that’s when the whole of the ball crosses the opponent’s goal line, in between the goalposts and under the crossbar.

That goal allowed Canada to earn a 1-1 draw with Bulgaria in a friendly played on Austrian soil.

Judging by the empty seats, most of the locals didn’t take advantage of the fact that tickets for the game were going for the bargain-basement price of six Euros each. The goal came off the foot of veteran Atiba Hutchinson, who put his penalty kick just inside the post after teammate Tosaint Ricketts was kicked in the face by a Bulgarian defender.

Ricketts came close to doubling Canada’s goal total a couple of minutes after Hutchinson broke the 14-month goal drought — but his volleyed effort was saved by Bulgarian keeper Vladislav Stoyanov.

Even though Canada had a couple of decent looks early, and Randy Edwini-Bonsu looked dangerous in acceleration with the ball at his feet, it was the Bulgarians who took the lead thanks to some very flat-footed defending by Canada’s back four. After a couple of tic-tac-toe passes, the ball went to striker Andrey Galabinov in the penalty area, who shrugged off defenders Adam Straith and David Edgar like they weren’t there, and then blasted a shot through the legs of keeper Milan Borjan.

Galabinov was Bulgaria’s most dangerous player; he had two wonderful second-half chances to win the game for the European side. He headed an effort off a corner kick just wide, and later forced Borjan to make sprawling save that would require the Canadian keeper to get medical treatment.

Bulgaria pressed through the second half, earning several more good looks on corners, but Canada was able to survive to get the draw. Which, by the standards set over the last couple of years, is real progress.