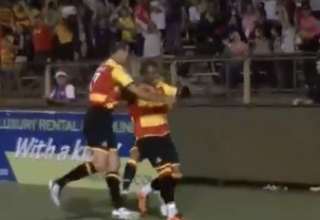 FC Edmonton was a man up for more than 50 minutes of soccer, but never asserted its numerical superiority and fell 1-0 on the road to the Fort Lauderdale Strikers in their NASL season opener.

Returning to the site of the 5-0 playoff loss that ended its season, FC Edmonton got the benefit of what should have been a game-changing decision, when Striker Aly Hassan was sent off for a late challenge on Eddies’ defender Fabrice Lassonde.

But, outside of a break from Matt Lam that forced Strikers’ keeper Matt Glaeser into a fantastic one-on-one save at the end of the first half, FCE didn’t do enough with the man advantage.

In fact, for large portions of the second half, Fort Lauderdale did not seem like a team that was a man down. And, right after Eddies Michal Misiewicz made a highlight-reel, stretching save to deny Striker Lance Laing’s scorching drive, he found himself picking the ball out of the back of his net. After the ensuing corner, the Eddies couldn’t relieve the pressure and former MLS star Andy Herron got on the end of a low cross from teammate Scott Lorenz and converted the chance.

“I made the save, and they played a short corner,” said Misiewicz. “And then they switched it. The sucked everyone to the left-hand side, and they played it to the right-hand side. When the goal happened, their attacker looked to a be a few feet in front of our defender, I thought it was offside, but I’d have to look at the tape.”

Other than some speculative strikes from Shaun Saiko, FCE did little to threaten Glaeser in the second half, as the Strikers’ fullbacks did well to bunker down and take away space in their own third. Striker defender Toni Stahl was exceptionally strong, snuffing out chances and not allowing the strikers to get behind.

In the first half, FCE attacked almost exclusively up the left side, with much of the offensive thrust being generated by French newcomer Serisay Barthelemy. Lam, on the right, didn’t have much of a foot in the game until he go that chance late in the first half.

Really, Fort Lauderdale should have made it 2-0, but a late free kick from Laing that had Misiewicz beat crashed off the crossbar.

“It was vital for us to get off to a good start, and it didn’t happen,” said Misiewicz.

And Misiewicz, who played every minute of every match for the Canadian team at the Olympic qualifiers, said fatigue wasn’t a factor.

“No, I felt fine out there,” he said. “Shaun (FCE teammate Shaun Saiko, who was also with the U-23 team) and me didn’t join the team in Minnesota (where it played its final preseason game Monday). We had a couple of extra days off.”

FC Edmonton started the game with four players across the backline who weren’t with the team last season; Frenchmen Kevin Hatchi and Jonathan Joseph-Augustin partnered in the middle of defence, as Paul Hamilton had to miss the opener due to a red card he picked up in the playoff game from last year which carried over to this season. And, former Striker Adam West started on the left, with Lassonde on the right.

But, before halftime, West was forced to leave the game due to a hamstring problem, and Antonio Rago came in at right back, with Lassonde moving to the left.

Defence wasn’t the issue, though — an attack that didn’t take advantage of the red card was. Maybe it was the fact that FCE played just one preseason game against NASL opposition, but the offence wasn’t sharp. One good chance from Lam isn’t enough for 90 minutes.