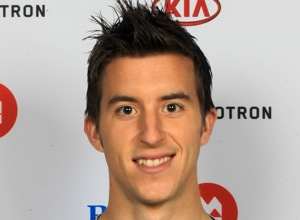 It is generally considered that an official has done his job if, at the end of the game, spectators are still in the dark as to his identity.

Mark Geiger refereed today’s tilt between the Impact and Crew, one the Columbus XI took 2-0 to open the home portion of its schedule with its first victory of the 2012 schedule. Last season’s MLS Referee of the Year showed the red card in the 19th minute, sending off Jeb Brovsky following an airborne contest that saw the Impact defender’s elbow make contact with Crew forward Milovan Mirosevic’s ear, a turn of events that normally might (maybe, possibly) draw a yellow.

Ten minutes later Geiger awarded Columbus a penalty after a tackle attempt by Impact midfielder, Felipe, that saw the young Brazilian get his foot on the ball before his trailing leg got tangled with that of Crew attacker Emilio Renteria, who led his club with five shots on the afternoon.

The shot from the spot was taken by Mirosevic, who put it to the right of left-diving Impact keeper, Donovan Ricketts, to give Columbus the lead. The 6-foot-5 Jamaican national seemed to spend more time horizontal than he did vertical, making seven saves, one more than did opposite number, Andy Gruenebaum, on his way to a clean sheet.

Ricketts’s final landing, after a 76th minute dive to his right, did not appear to be soft or happy. He arose shaking his wrist in visible discomfort but with all three personnel changes already recorded for the afternoon, played on until the final whistle.

Columbus’s second goal signalled the end of the afternoon’s suspense as to the final outcome. It came in the 66th minute of play with unmarked forward Olman Vargas heading home a left sideline feed from Shaun Francis.

Montreal started the game strong, getting several chances at the Crew goal and, despite playing 10 on 11 for the final 70 minutes, continued to attempt to mount assaults on the enemy goal.

The Impact’s first scoring opportunity came in the eighth minute. Patrice Bernier moved the ball up to Justin Mapp. Mapp, who played a strong game, crossed it to a charging Justin Braun with the Impact forward’s feet-first goal-ward slide bringing him to the ball a split second after it was gathered up by Gruenebaum. Mapp hit the crossbar in the 42nd minute, his drive coming from outside the 18-metre box, less than 10 minutes later Braun had his shot from the edge of the box tipped wide.

The Impact plays its next game Saturday against New York Red Bulls, with several busloads of supporters in tow for the event and then head west for a Wednesday encounter with Real Salt Lake before meeting Toronto at Olympic Stadium on April 7.