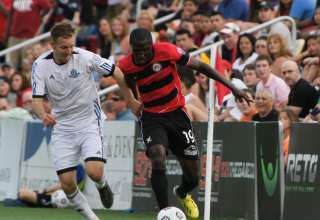 For the third game in a row, FC Edmonton had to play a significant portion of the contest with only 10 men on the field.

But, after Massimo Mirabelli came onto the pitch as a 70th-minute sub, it didn’t seem like the Eddies were a man down. It was a game-changing switch. With the Eddies down 1-0, coach Colin Miller gambled, deciding to replace Shaun Saiko with Mirabelli on the left side. FCE found new life with Mirabelli, who led attack after attack.

Neil Hlavaty scored on a 30-yard screamer of a free kick, and the game ended 1-1.

But, based on just the final 20 minutes of the match, it could have been 4-4. Both teams cleared attempts off the line. Atlanta’s Beto Navarro had a headed effort loop off the bar. Mirabelli, from his off wing, squared the ball to the top of the box for defender Albert Watson to have a shot; and Atlanta keeper Eric Ati was forced into a wonderful one-handed save.

In injury time, Mirabelli went racing down the left side and forced Ati into another diving stop.

“Massimo has improved by leaps and bounds,” said Miller. “At the end of the game, he’s got a gash on his face, he may need a couple of stitches. He has given me a very good problem, I have to make some decisions for next week. Their keeper was excellent today, I congratulated him after the game.”

Mirabelli wasn’t the only Eddie who needed medical attention after the game. Captain and central defender Albert Watson also needed emergency dental work after his two front teeth were knocked out (more on that later). The Eddies dressing room may have resembled an NHL team’s.

“The effort and character the group showed today, they have set the example to everyone in this organization about the level of commitment and effort that is needed in order to be a starter on this team,” said Miller.

The frantic final 20 minutes — maybe the most jam-packed-with-excitement segment of a game in FCE history — was clearly a product of the compressed spring schedule. FCE came into the match trailing first-place Atlanta by four points in the NASL table. Including the Atlanta match, the Eddies had just four games left on the season. The winner of the spring season gets to host the Soccer Bowl in November. The second-place team — maybe a set of steak knives.

So, with the top of the table being a muddied mess, both teams wanted three. So neither team wanted to play for the draw.

“Even when we went down to 10 men, we knew we’d come here for the three points,” said Hlavaty. “That didn’t change.”

With Carolina beating Tampa Bay 2-1 with two stoppage-time goals, the RailHawks now move into first, five points ahead of the Eddies. Carolina faces FCE at Clarke Stadium on Sunday.

FCE was put at a disadvantage just 31 minutes into the match, as Chris Nurse received his second yellow for bringing down Atlanta’s Borfor Carr from behind. His first yellow came early in the match, after a collision with Ati.

“I have to take the blame,” said Miller. “I had discussed with Jeff (assistant coach Jeff Paulus) that we were going to take Chris Nurse at the half. But it ending up not getting that far. I should have taken him off right away.”

Supporters will always feel aggrieved when their team’s players are sent off. And judging by the FCE supporters on Twitter, the work of referee Daniel Fitzgerald was in question. But, early in the second half is where the ref deserved to be questioned. After losing possession of the ball, Atlanta’s Danny Barrera, unprovoked, leapt into the path of Watson and drove his shoulder through the defenceless defender’s head. Watson lost two teeth, but wanted to stay in the game after receiving medical attention.

Barrera didn’t see a card — red or yellow — for what was clearly an intent to injure. And, if NASL doesn’t have a second look at this one, something is wrong.

Yes, there were calls that didn’t go Atlanta’s way. Matt Stisser had the ball in the back of the Eddies’ net just 11 seconds into the second half, but it was ruled offside. And the foul that led to the Hlavaty free-kick equalizer was a soft call. But there is no way that Atlanta should have had 11 men on the pitch after the Barrera, ahem, challenge.

Miller said he didn’t have a good look at the Barrera challenge on Watson.

In the 59th minute, Stisser got a goal that did count, after he banged home a low cross from fullback Mark Bloom to give the home side the lead.

But then the changes were made, with Miller crediting both Mirabelli and fullback Antonio Rago — who also came in at the 70-minute mark — for making serious contributions.

“We work on them and I felt good about standing over the ball,” said Hlavaty. “I hit it where the keeper wasn’t going to get it — I was very pleased when it went in.”

The Eddies are a much-improved team in 2013; games that would have been losses in 2012 are now being gutted out into draws. The team was able to take points out of two of the last three games in which it was down to 10 men. But Miller knows the next phase is turning the draws into wins.