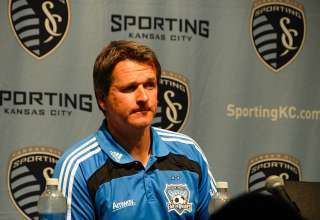 With Canada’s national-team coaching spot still vacant, and the Gold Cup a month away, more than a few ears will be to the ground now that Frank Yallop is unemployed.

On Friday, the reigning MLS Coach of the Year and the San Jose Earthquakes came to a mutual agreement to part ways. He will be replaced by his assistant and long-time Canadian national-teammate, Mark Watson.

Yallop led the Earthquakes to the Supporters’ Shield last season, but the team is struggling this season — as Chris Wondolowski is nowhere near his 27-goal pace of last season. Right now, the Quakes are out of a playoffs spot. But, making the move so early into the season, and with the parties coming to a mutual agreement, it raises the question: Is this the most polite firing ever, or is this a sign that Yallop wants to move on to different challenges?

Yallop has won two MLS Cups as a coach and has been the coach of the year twice.

“I want to personally thank Frank for all of his efforts since 2007 to help make this club successful,” said Quakes’ general manager John Doyle in a release issued by the club. “He guided this team from an expansion side in 2008 to just one goal away from getting to the MLS Cup Final in 2010 and a Supporters’ Shield last year. I have enjoyed working with Frank over the past five and a half years and wish him well in all his future endeavours.”

“(President Dave Kaval) Dave, John and I met earlier this week and we mutually agreed that it was time for the club and me to move in different directions,” said Yallop. “Mark Watson is an excellent coach and the team is in very good hands. I want to thank the entire Earthquakes organization for my time here. I want to thank the players and coaching staff that have been here over the past five and a half years. They made my job really enjoyable with their professionalism and hard work, especially last year, which was a magical season, and one I will never forget. The ownership group has been very supportive during my time here. I would also like to thank Dave and John for all their efforts to help me put the best team on the field, while also building a professional atmosphere for both players and staff. I want to thank the fans here as well. They have been great and really drove the team on and have been a big part of our success. I wish the organization all the very best in the future.”

With Canada looking for an experienced boss, is it time to have a look at Yallop? The timing is interesting.