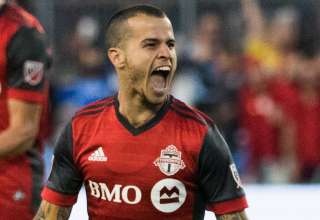 Sure, in the days to come, we’re all going to micro-analyze Toronto FC’s CONCACAF Champions League final loss to Chivas. TFC came back from a 2-1 first-leg deficit, taking the second leg Wednesday in Mexico, 2-1. But, Chivas was perfect in the penalty shootout, while TFC’s Jonathan Osorio saw his shot come off the underside of the bar and out, and Michael Bradley skied his attempt.

We will look back at the penalty misses, or the fact that, in time added on, Marky Delgado had a wonderful chance to pot the winner; but his half volley on a cross from Sebastian Giovinco was hit well over the bar.

But, what makes this final hard to take, well, it’s because CONCACAF just had to go and go all 1970s NASL with the format. It’s ridiculous that a continental club championship doesn’t provide for extra time to be played if the two teams are level after two legs. To go straight to penalty kicks… ugh. Give the players 30 more minutes to try and decide a championship in an 11-v-11 environment.

Come on. Not playing extra time? That’s no better than the offside lines of the old NASL, or the mini-games of the 1990s MLS. There’s no reason not to play a final the way finals are meant to be played. If they are tied after regulation, they play 30 minutes. If needed, then they go to kicks. That’s the game.

I had a reader tweet to me right after the game that the game may as well have been decided with a skills competition. You know what? He’s right. Why not just have Giovinco go up against Chivas’s Alan Pulido? They can dribble the ball through a maze of cones. First one to go end to end wins.

These two teams provided amazing theatre over two matches. To not give them the chance to play another 30 minutes, to possibly determine the title with an honest-to-goodness goal, well that’s simply unjust.

Imagine if CONCACAF officials were in charge of other jurisdictions. The most recent World Cup final and Euro final — both decided by dazzling extra-time goals — would have gone right to kicks. Those goals are going to be remembered by soccer fans for ages to come. They are the magical moments that, well, make us all love this game so much. Who knows if TFC-Chivas would have been settled by a similar moment of magic? But, well, you miss 100 per cent of the shots you don’t take, right? (Sorry, Wayne.)

Look, we knew the rules going in. We knew that this could happen. But, in previous rounds, we were spared this straight-to-penalties stuff. But, on CONCACAF’s biggest stage, this ridiculous format rose up and bit what should have been a classic final right in the ass.

Now, Toronto FC did well to get the game to the penalties stage. Chivas scored first in the second leg, as Rodolfo Pizarro’s clever pass found forward Orbelin Pineda, who caught Toronto FC fullback Auro flatfooted. Pineda converted.That made it 3-1 on aggregate.

TFC responded, though, big time. With a little help from suspect goalkeeping, that is.

Last week, Miguel Jimenez got the start in goal for Chivas, and made a couple of big saves on Toronto FC’s Jozy Altidore — key points in a 2-1 win in the first leg of the CONCACAF Champions League final.

Jimenez was in goal because regular starter Rodolfo Coto wasn’t available due to suspension.

Coto returned for the second leg in Mexico.

On TFC’s first goal, Coto went for a needless wander, leaving the net wide open for a TFC equalizer.  Nicolas Hasler took advantage of the fact that Chivas couldn’t clear its lines, then was able to get the ball across goal. For some reason, Coto charged way out of the net, and was actually nowhere near his goal when the ball was turned in by Jozy Altidore.

Then, just before halftime, a Sebastian Giovinco shot from distance beat Coto near post. It’s the kind of shot that any top-shelf keeper has to handle. Coto didn’t.

Chivas’s Jose Godinez struck the post in the second half, and an injury forced Altidore out of the game, which limited TFC’s options when it came to penalties.

TFC coach Greg Vanney admitted that the grind of the CCL had taken its toll on the Reds, who had “zero centre backs” at 100 per cent for the second leg.

The CONCACAF Champions League has had issues in the past, with teams, fans and TV networks not always taking the tournament seriously. But, by not playing extra time, it feels like CONCACAF doesn’t take its own tournament all that seriously.

So, CONCACAF, stop this nonsense in time for the next CCL. Please don’t keep messing with the integrity of the game.