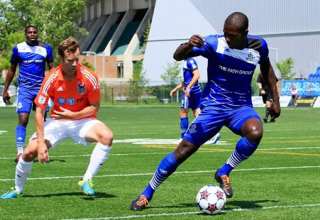 It feels kinda fitting that, on the Thanksgiving long weekend, the Carolina RailHawks will be visiting Clarke Stadium.

That’s because FC Edmonton has feasted on roasted RailHawk, with a side of potatoes, so far this season. In two previous meetings, the Eddies have got all six available points, and scored a total of, gulp, nine goals. The Eddies scored six on the RailHawks the last time they came to Clarke Stadium.

So, the key on Sunday is to forget all of that. The Eddies certainly won’t be expecting another six-goal eruption against a Carolina team that has made several signings during the fall season that have been designed to make it tougher to play against. This past week, the RailHawks signed former Sporting Kansas City midfielder Alex Martinez.

“We don’t look at past wins or past matches, to be honest,” said Eddies captain Albert Watson. “We’re just taking every match as it comes. Look at the last game against Tampa (a 1-1 draw), we should have won the game. It was a diabolical call by the referee (which gave the Rowdies the equalizer on a penalty kick) and I’ve looked at it again a bunch of times and I still don’t know what he’s called there. That’s the way it’s gone for us this year and we have to get on with it.

“So, we’re not going to look past games. We know Carolina has added strong, strong to their squad over the last six weeks. It seems like they’ve added a player every week. They’re going to be a tough team to play against on Sunday.”

Coach Colin Miller said that the Eddies have to toss the previous two successes against Carolina out the window.

“We’ve not even mentioned them (the previous wins). To be honest with you, it’s a very different Carolina team than came in last time. Colin (coach Colin Clarke) has made changes to his roster and added more stability to their group. They are harder to break down. I watched them play against Fort Lauderdale a couple of times and I watched them when they played recently against Indy, so I don’t expect to see another 6-1 performance. Sure, I’d love to see that for the Eddies, but I don’t see it happening.”

The Eddies are in sixth place in the NASL overall standings. Right now, the fourth spot — and holders of the last available post-season seed — belongs to Fort Lauderdale. With four games left on the season, the Strikers are six points up on the Eddies. The RailHawks are in fifth, five points up on Edmonton.

So, with the games running out, a draw would not serve the Eddies at all. Miller said the outlook on the match is “win at all costs.” Miller said that he and the coaching staff go over the scenarios before all games, planning out possible substitutions depending on if the Eddies are ahead, behind or drawn. He said that, if the game is tied with 20 minutes left to go, the moves will all be “positive,” as it’s clear the Eddies can’t afford a single point.

“For the most part (when team is tied late), we’ve said ‘let’s win.’ There have been times when we’ve said, ‘we’ll take a draw, but we won’t play for a draw.’ I definitely admit that on one or two occasions over the past two seasons. But our substitution plan for Sunday will be a very positive one, I assure you.”

Kareem Moses, who left the Tampa game with an injury, was training yesterday. Initially, the coach was afraid the fullback had done damage to his ribs, but Moses is ready for action. Eddie Edward, the fullback who has played the last couple of game in central midfield, will miss the match because he was sent off last week.