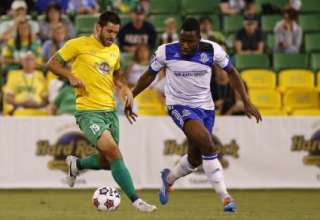 The Eddies played well enough to leave Tampa with three points and new life in their chase for a post-season spot.

But, a controversial decision from referee Ted Unkel and some very good late stops from Tampa Bay Rowdies keeper Matt Pickens forced FC Edmonton to settle for a 1-1 draw with the Rowdies. Frankly, at this stage of the season, that result doesn’t do much good for either team.

And, then, it all changed with one blow of a whistle. Unkel blew a play dead after a cross went into the FCE area. A few players had gone down in the scrum. The Rowdies players went to complain, as they were sure the foul was being called on them. But Unkel, instead, pointed to the spot, claiming that FCE defender Kareem Moses had impeded the Rowdies’ Keith Savage.

To add insult to injury, Moses had to leave the game shortly after — Miller said he suspects that the fullback has a broken rib; but that’s not confirmed by a medical official. Moses will get X-rays to determine the extent of the injury.

With both teams knowing a draw wouldn’t really serve each of them in the standings, the game opened up dramatically in the final 20 minutes. The Eddies, though, carved out the two best chances. FCE striker Tomi Ameobi got in behind the defenders and had a great look at goal; he tried to push the ball through Pickens’ legs — but the keeper got just enough of it. The ball was directed through the wickets, but took enough of a deflection that it went off target.

Late in the game, Pickens made a great diving stop to deny a headed attempt for Horace James.

Near the end of the match, FCE fullback Eddie Edward picked up his second yellow as he fouled Hristov from behind. He will miss next weekend’s home date with the Carolina RailHawks. Edward was actually going to be suspended after he got the first yellow card, for a shoving match with ex-Toronto FC midfielder Darel Russell. That would have been enough to get him tossed for next week’s game, because of yellow-card accumulation.

“The effort from the players was tremendous,” said Miller. “Both teams were very competitive, and there wasn’t a bad tackle in the game. But, somehow, we’ve got a penalty kick against us and had a man sent off. Look, I know there will be some people who will say, ‘there goes Miller again, having a go at the referee.’ But in this case, I honestly believe that we deserved three points tonight.”

Miller said the Rowdies do deserve credit for playing at a pace “that’s more like the game in the U.K. than anywhere else in the league.”

And, the Rowdies did create the first few good chances of the game; the Eddies had flight issues getting into Tampa on Friday, thanks to the cancellation of a connecting flight to Chicago. But Moses did well to block an effort fromRussell, and in the 25th FCE keeper Lance Parker made an excellent diving stop on a Hristov free kick.

Meanwhile, Pickens did well to come off his line and take the ball off of Ameobi’s foot as he attempted to volley home an attempt.

But, three minutes before halftime, the Eddies got the lead. A low cross from Lance Laing was dummied by Ameobi, and the ball ended up at the far post at the feet of Neil Hlavaty. Pickens made a great sprawling save on Hlavaty’s attempt; but the rebound came to Chad Burt, who played for the Rowdies when they were known as FC Tampa Bay. Burt buried his shot into an open goal.

The Eddies managed to stifle striker Corey Hertzog, who made his Rowdies debut Saturday night. Hertzog played 13 games for the Eddies last season, while on loan from the Vancouver Whitecaps. He also scored for the Whitecaps against the Eddies in the 2013 Amway Canadian Championship.

But, despite all of the positives, the Eddies got only a point. The RailHawks lost, so the gap between the Eddies (in sixth) and Carolina for fourth spot in the overall standings — and the final playoff spot — is down to five points. But Fort Lauderdale, in fifth, one spot ahead of FCE, has 31 points — and a game in hand on both Carolina and FCE. The Rowdies are point behind the Eddies, but have TWO games in hand. That illustrates just how a win in Tampa would have changed things for FCE.

“We will keep fighting,” said Miller. “We were just dead on our legs at the end of this game. The guys’ effort was tremendous. And they are absolutely devastated in that dressing room. You could hear a pin drop. It means that much to them.”