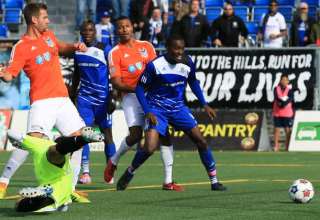 For the last week, FC Edmonton defender Mallan Roberts has been in a competition with Lance Laing. As the team worked on finishing in training, Roberts wanted to show Laing that he could score more goals than him.

Roberts came into Sunday’s game with Carolina with one career goal; he scored his second just five minutes into the match, and it spurred the Eddies to a 3-0 win at Clarke Stadium. The win puts the Eddies just four points behind Fort Lauderdale for fourth spot (and the final post-season spot) in the NASL overall standings.

“I’ve been working on my finishing all week,” said Roberts with a wide smile on his face after the game. “I have to give credit to Lance Laing. He’s always saying that I can’t finish. So, we had a competition in training to see who could finish more. I won in training and I think that I won again today.”

After Neil Hlavaty took a free kick, the ball bounded around in the penalty area and Roberts corralled it. He shook off one Carolina defender, then poked the ball past another defender. He then slotted a shot inside the far post. It was a finish taken with the composure of a veteran striker, not a young centre back.

In a game they just had to win, the Eddies got the lead inside of five minutes. But, Carolina wasted a glorious chance to tie it just after the 10-minute mark. Referee Dave Gantar pointed to the spot after he ruled that FCE defender Albert Watson had blocked RailHawk Austin Da Luz’s shot with his arm. Enzo Martinez marched to the spot to take the shot and blasted the penalty well over the ball. And even though Carolina was going into a stiff wind in the first half, Martinez’s effort didn’t come down till it had cleared the fence behind the Eddies’ goal.

To make things even worse for Carolina, the Eddies doubled their lead before the RailHawks could recover from the emotional letdown of the Martinez miss. Chad Burt hit a wonderful ball up the wing for Horace James, who then laid off a great ball to the top of the box for Ritchie Jones, who side-footed the ball inside the far post.

Burt, who was acquired in mid-season, has solidified a spot in the starting XI; and Miller thinks the future could be bright for the player.

“Chad gives us that something different. I am going to be respectful and I will call him a poor man’s Mulholland. Luke Mulholland (now with Real Salt Lake), in Tampa Bay, I thought he was arguably the bet player in NASL last season. I think if Chad can deliver that final ball to the quality that I know that he’s capable of, I think he can go to the next level of football.”

James, meanwhile, enjoyed his best game as an Eddie. Using his pace down the right wing, he was involved in all three of the Eddies’ goals. He won the free kick that led to Roberts’ opening goal. He set up Jones’s goal. And, six minutes into the second half, he — ahem — set up Tomi Ameobi’s marker that ended up being the back-breaker.

After taking another great pass from Burt, James busted down the right wing and, despite being at a bad angle, took a shot that beat Carolina keeper Akira Fitzgerald. The ball went off the post, but caromed right off of Ameobi’s legs and into the net.

James said the team was perfectly set up to face Carolina.

“Colin [Miller] had everything down to the pin with this team… and everything that we worked on in training we executed today.”

From that point on, Eddies’ supporters could start spending most of the second half singing their team’s praises and working out the scenarios for the final three regular-season weekends. Carolina and Fort Lauderdale play each other next week, while the Eddies go to Ottawa. Ideally, the Eddies would hope that the Strikers and Carolina — who are fourth and fifth in the NASL standings — would play to a draw, while FCE goes to Ottawa and wins. If that happens, with the Eddies having to go to Fort Lauderdale in two weeks, the Eddies would be back in control of their post-season destiny.

As for Carolina, the RailHawks are likely happy to see the last of the Eddies. This season, Carolina has played the Eddies three times, lost all three, and given up 12 goals. To put it in perspective, the Eddies have 30 total goals this season. That means 40 per cent of the Eddies’ goals have come against Carolina — in just 270 minutes of football.