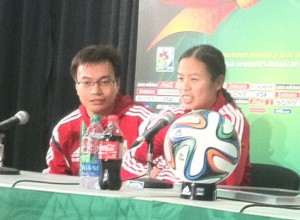 It really is something to try and pay attention to two matches at the same time — one in front of you at the stadium, and the other on the screen.

They are both so enthralling, so wonderfully bizarre, that you feel absolutely torn in two.

That was the situation for me on Friday night. And it was a refreshing reminder of why I love this game so damn much. As I watched Germany and China contest one of the most incredible matches in the history of the U-20 Women’s World Cup at Commonwealth Stadium, I had the Canada-Finland feed up on my laptop, seeing if our national side could recover from its opening game loss.

As I got back upstairs from the coaches’ press conference in Edmonton after a stunning 5-5 draw, I was able to get to my laptop just in time to see Nichelle Prince tuck in a goalmouth rebound to give Canada a 3-2 lead over Finland. After some wonderful work down the right wing from sub Janine Beckie, who had scored earlier in the half to begin the Canuck rally from two goals down, the ball fell so wonderfully to Prince.

After an awful beginning to the game, which saw Finnish striker Juliette Kemppi punish a mistakes from Canadian keeper Kailen Sheridan and then pounce on a giveaway from Canadian defender Sura Yekka, the home side was able to rally. And the Canadians held on to that 3-2 score.

The Germans and Chinese had just wrapped their 10-goal marathon in a torrential rainstorm, as news spread that Canada had just scored to make it 2-1. No, wait, 2-2. Two of the subs brought on by coach Andrew Olivieri, Beckie and Valerie Sanderson, had scored within two minutes of each other.

Beckie, who at this time last year was being groomed in the U.S. U-20 program, looked to be the prize acquisition. Sure, in Canada we’ll decry the players who leave our program and play for another nation instead, but we’re totally OK with the fact that our program actively recruits from other countries, as well. By scoring the first and setting up the winner with a shot that Finnish keeper Vera Varis couldn’t handle, Beckie’s acquisition looks to be some shrewd business by our women’s program. And we owe some thanks to her older brother Drew, who has represented Canada in the past and plays for the Ottawa Fury, for helping convince his sister to make the move.

(The Beckies were born in Saskatchewan, but the family moved to Colorado when the kids were young).

Canada still isn’t safe. Heck, in a freaky world, it could actually beat North Korea by one in its final group-stage game, and still not go through — if Ghana beats Finland by enough goals. There’s still a lot of work to be done before Canada could clinch the second spot in its group and a quarter-final date in Edmonton. (First place in the group, with North Korea already having two wins and a much better goal difference than anyone else in the field, may be too much to ask.)

And, while, as a Canadian, I was elated to see our team rise from the ashes in Toronto, the subjective viewer would easily argue that Canada-Finland wasn’t nearly the freakiest match of the day.

No, that came in Edmonton. The Germans gave up one goal, total, in the previous U-20 World Cup. They shut out the Americans in the Group B opener, in a statement game in the Group of Death.

By the midway point of the second half of China vs. Germany, formations weren’t there to be seen. Clumps of players moved in one direction, clumps of players moved in the other. Basically, it resembled Sunday pick-up, with goals flying in as defenders panicked and left their positions and attackers attempted shots from all angles. A penalty kick on one end for hand ball was followed six minutes later by a penalty-kick goal at the other end for handball.

The German fullbacks refused to tuck in, allowing the Chinese to play diagonal balls to the forwards. The Chinese couldn’t win 50-50 battles in their own area.

And it was enthralling. Here are the key moments:

Pauline Bremer scores in the ninth, after she latches onto a long ball hit between the two Chinese central defenders and keeper, Feifei Lu. Lu is way too late coming off her line to get the ball; Bremer beats the two defender to the ball and rounds the keeper, who is now in no man’s land.

But, in the 40th, the Chinese find the equalizer; German keeper Maike Kaemper tips Ruyin Tan’s shot onto the bar. But she can do nothing about Beiyan Zhu’s rebound attempt.

Just before halftime, both Chinese central defenders move close to the left sideline to help the fullback, who really didn’t need help in the first place. The entire shift to one side of the field leaves Germany’s Sara Daebritz open in the middle of the park. The ball comes to her, she goes in alone.

Three minutes into the second half and China equalize; two quick passes after a German turnover in the middle of the park and Jiali Tang has stuck the ball in the net.

In the 50th minute, just two minutes after China equalizes, Germany’s Theresa Panfil attempts a cross that, instead of finding someone in the area, floats in over Lu, just inside the far post.

One minute after Panfil gives the Germans the lead, the Chinese get a free kick from the right side of the German area, near the end line. Jiahui Lei takes it, Tang skips over it, and it goes right through Kaemper into the goal.

The German errors keep coming. Another free kick from the right side, and Germany’s Rebecca Knaak, in the box, inexplicably sticks out her arm to knock it into touch. Zhu converts the penalty.

In the 71st. Panfil latches onto the ball after Lu can’t handle a cross in the box.

Finally, Tianlun Shi opens up the German defence with a diagonal pass down the right channel for Chen Zhang. She finishes. And once again the Germans are punished for not being compact enough, for not having their fullbacks tuck in.

“Yes of course the rain affected the ball today,” said player-of-the-match Zhu through a translator. “But I think it affected the Germans, they liked to play the long ball and it bounced differently. I think it was to our advantage.”

German coach Maren Mainert said the rain had no affect on the match.

“It definitely was an unusual game with an unusual result,” she said through a translator. “There were a lot of back-and-forth chances. The point distribution was fair. A tie is fair, it reflects the game.

“When you give up five goals you begin to doubt yourself as a coach, what you have been working towards. I know everyone in the stadium had a more enjoyable time.”

And the team that looked so good against the Americans now looks so very vulnerable.

And the U.S. pulled into second place in the Group of Death, one point behind the Germans, after beating the Brazilians 1-0 on Lindsey Horan’s 80th-minute goal. But, all four teams in the section are mathematically alive going into their final group-stage games.