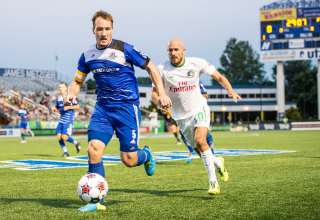 When he finally decided to hang up his cleats, Marcos Senna will look back on a career filled with international glory in a Spain shirt, La Liga greatness in his time with Villarreal, and an NASL championship with the New York Cosmos.

What he won’t want to remember is his botched penalty-kick attempt against FC Edmonton Wednesday night.

After FCE keeper John Smits was called for bringing down New York’s Jemal Johnson, Senna stepped to the penalty spot early in the second half and, after a stutter-step, blasted a penalty kick sky high into the Long Island night.

And, FCE would go on to survive some late Cosmos pressure and controversial officiating to get a 0-0 draw on the road, bringing the Eddies to five points in five games in the NASL fall season.

The penalty came after Smits came and failed to catch a throw-in; that’s the second time in two games that Smits has surrendered penalties after failing to collect balls in his area. Luckily, neither of his errors cost the Eddies any points.

But, after the Eddies went down to 10 men in the 73rd minute — after Tomi Ameobi was ruled to have come in with a two-legged challenge on New York’s Danny Szetela — Smits more than made up for his earlier error.

Smits made a diving stop off a drive from just outside the area from Carlos Mendes, but saved his best for a free kick from Ayoze that looked to be the match winner. Ayoze’s shot was labelled for the top corner, but Smits climbed the ladder and, with his back turned to the shooter, reached up to push the ball over the bar.

FCE coach Colin Miller said Smits “more than made up” for the catching error with the late saves — but the fumbles are a concern.

“It’s twice in two games that he’s come off his line, twice in two games that he’s come for it and hasn’t come up with it. Now, I spoke with John and he says that he was fouled on the play. I haven’t seen it on replay yet. I am all for a keeper being physical and wanting to be aggressive. But if handling the crosses is a problem, yes, it is a concern.”

The Eddies will feel that the draw was the least they deserved from the game, considering that, even on first look, the red card on Ameobi looked exceptionally harsh. Both legs weren’t extended, and the contact wasn’t severe. In fact, you could argue it was a borderline card — a borderline yellow card, that is.

If this was MLS, where red cards are reviewed, the Eddies would feel pretty confident that this card would be overturned and Ameobi would be eligible to play Saturday in Minnesota. Alas, in NASL, where supplementary discipline is a mystery, they’ll likely have to do without the forward.

But that doesn’t mean that Miller and FCE General Manager Rod Proudfoot won’t try. Miller confirmed that the team will send a protest letter to NASL on Thursday morning, asking for Ameobi’s red card to be rescinded.

Despite being down to 10 men for a little more than 20 minutes — with time added on factored into the equation — the Eddies had one great chance to win the game. A Neil Hlavaty free kick caught Cosmos keeper Jimmy Maurer on the wrong side of goal, but struck the bar.

The Eddies created the best chance of the first half; after a Cosmos free-kick play was broken up, Horace James led a three-on-one break up the park. He slid the ball to Lance Laing on the left, whose shot was smothered by Maurer, who came well off his line. Had Laing passed back across the grain rather than shot, he would have taken the keeper out of the play, with two Eddies to pick out in the box.

Miller spoke to Laing about the decision, and the midfielder told him that, from his vantage point, he thought that teammate Ritchie Jones had drifted into an offside position, giving him no option but to shoot.

As well, Eddies midfielder Milton Blanco left the game in the 14th minute, clutching his knee.

Miller confirmed that Blanco will be out for a considerable amount of time, as he looks to have injured his MCL.

Despite the adversity, Miller praised the players.

“We played in 30 Celsius on Sunday and had to fly across the continent. The attitude of the players was simply fantastic.”