June 19, 2021
9 New Articles
Home NASL & USL FC Edmonton Did it go in or not? Minnesota/FCE game hinged on this call 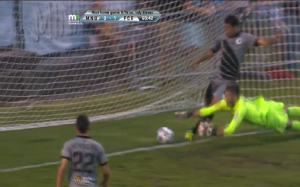 The scene: Midway through the second half of Saturday night’s game between Minnesota United FC and FC Edmonton. The Loons have just taken a 2-1 lead over the Eddies on a goal from Daniel Mendes.

FCE right back Edson Edward goes up the wing, and tries a cross. Minnesota central defender Thiago Calvano tries to chest it down, but makes a mess of it. The ball skips off his chest and towards the Minnesota goal. He and keeper Mitch Hildebrandt scramble for the ball. Hildebrandt reaches out as Thiago gets onto the goal line and boots the ball away.

Minnesota then goes down the field and scores what would stand as the winning goal. Mendes smashes home a feed from Miguel Ibarra, and makes the score 3-1. The Eddies would score on a Neil Hlavaty 78th-minute penalty after Hildebrandt was sent off for taking down striker Frank Jonke in the box. But, despite a late effort from Chad Burt that goes off the crossbar, it’s as close as the Eddies will come. A 3-2 loss.

But, rewind to the match-altering moment. Was the Calvano near-own-goal actually an own goal that was missed by the linesmen? Still shots taken from the feed look to show the ball crossing the line. We can argue if it’s conclusive or not.

If the goal stands, it’s 2-2, the second Mendes goal never happens, and it’s a different game.

No, the NASL does not have goal-line technology. Two screen captures are published here for your perusal. The replay was shown just once on the Minnesota broadcast feed. 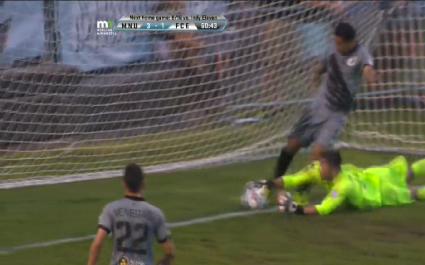 Now, understand that, because we’re not looking at a direct overhead angle (like we get in hockey), your eyes can play tricks on you. You may see all of the line, but remember that part of the ball’s sphere can still be hanging over the goal line. And, to be fair to the linesmen, this was a tough, tough call to make. But, if anything, it’s an argument for NASL to have some sort of way to review controversial goals/non-goals like this. If goal-line technology is too expensive, find a way to get a referee’s head under the hood. Really, how often do calls like these have to be made in games? Once a month, maybe? So we’re not looking at something that would slow down games.

And, in this age, there is no reason for an official not to get help.

FCE coach Colin Miller said that the Eddies’ subs, who were warming up behind the Minnesota goal, told the bench they didn’t think the ball went in. But he said he would love it if the NASL had a system that would allow officials to double-check a goal-line call.

“I think it’s something we saw in the World Cup and it worked well, it was good for the game. And we knew if the ball was in or not within seconds. I’m not a fan of going to replay for every single call in the game, but for goals I think it’s a good idea. You just don’t know how it would work in NASL stadiums. A lot of the teams don’t own their stadiums, they share them with other teams. How much would it cost? How could you install them?”

The closeness of the call doesn’t absolve the Eddies’ defenders of blame when it came to Mendes’s 3-1 goal. Even when a call goes against you, there is no way you can allow the opposition to break right down the field and make a few simple passes that puts the dagger through your heart.

The Eddies started off the game against the spring-season champions brightly. FCE, shut out in four of their five previous NASL fall season matches, put the home crowd on edge in just the fourth minute. A dreadful back pass from Juliano Vicentini was pounced on by Lance Laing, who finished smartly to give the visitors the lead.

But it felt a bit like the Eddies had just made Minnesota angry, and you wouldn’t like them when they are angry.

Minnesota pushed back in a hurry and, against a team struggling with what the coach things might have been food poisoning, and playing its third match in six days, it didn’t take long to get on level terms. Corner after corner was followed with Minnesota pressure.

Finally, the Loons got a penalty after Albert Watson, who nearly threw up on the field several times as he struggled with the mystery illness that had also affected Kareem Moses, was called for handling the ball in the box. NASL leading scorer Christian Ramirez got his 10th of the season.

“I though for 20 to 25 minutes we were in the game, but I think we had some players who were exhausted,” said Miller. “I had guys who were sick, we think we may have had a bad prematch meal, but I am still disappointed by the nature of the goals we gave up tonight. But I have to defend our players because I thought they were tired. It was warm, it was humid. And then we came back like we did in the last 20 minutes, I was very proud of the response.”