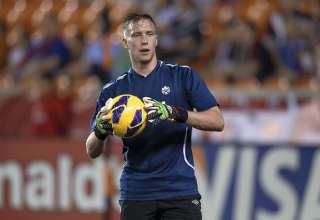 The Montreal Impact and Vancouver Whitecaps are each less than a week away from the starts of their regular-season campaigns. And both made moves Monday that will add some depth to their rosters.

The Whitecaps added Simon Thomas as the third keeper to the first team, signing the Canadian to a deal. Thomas came in and mopped up for the injured Lars Hirschfeld in Canada’s January friendly against Denmark, then got the clean sheet in a 0-0 draw with the United States in Houston.

Thomas began training with the Whitecaps late last season after he spent the 2011-12 campaign with English side Huddersfield Town. Before heading to England, Thomas was part of the Whitecaps Residency.

“When Simon trained with us towards the end of last year the thing that struck me about him was his attitude and his personality,” said Whitecaps coach Martin Rennie, in a release issued by the club. “He was already a good goalkeeper, but he has continued to show great improvement. We’re really pleased to add a player who came through our Residency program and we think that’s a pathway that others can follow.”

But, the Whitecaps currently have two MLS-No. 1 calibre goalies on board, and a real prize prospect in Thomas. Will something give this season?

As well, the Impact announced it had made decisions on the two players it selected in the first round of the 2013 SuperDraft.

Blake Smith, selected eighth out of the University of New Mexico, is in, while Fernando Monge, selected 18th overall out of UCLA, is out.

“We are very pleased to have come to terms with our first draft pick,” said Impact sporting director Nick De Santis in a release issued by the club. “He has shown good progress throughout camp. There is a big difference between the college game and the pros, so there will be an adjustment period for him. However, he is a midfielder who can play on the wings and has qualities that could make him successful in MLS.”

Even the bottom half of the first round of the MLS SuperDraft is not a sure thing and, with more and more prospects coming out of the academies, there is even less room at the inn for prospects who often come to the pro game at too advanced an age. Part of the problem, and the NCAA schools need to understand this, is that a lot of the prospects coming out of their programs have the feeling of being totally interchangeable. Outside of maybe the first four or five picks, there’s no feeling that player No. 6 is any better or worse (or different, when it comes to skills) as player No. 11 or No. 44.

So, really, it’s not a major surprise that one of Montreal’s first-rounders didn’t make the club.