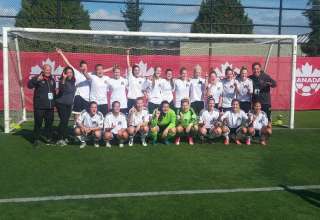 The national championships are a wonderful Thanksgiving tradition in Canadian soccer circles. And, congratulations need to go out to Edmonton Victoria, who sealed its fourth national championship in five years by getting a 3-0 win over Newfoundland and Labrador’s Holy Cross in the final game of the schedule.

Victoria is a true Canadian soccer dynasty; it came into the final day knowing it needed to win by two goals to usurp Surrey United at the top of the final-round table. And two goals in two minutes from Heather Lund and Elise Emmott sent the Canadian championship mainstays on their way to another title. Kristyn Shapka got the late insurance goal.

On the men’s side, Western Halifax FC’s Calum MacRae made a deft first touch and then placed a shot inside the post with the outside of his foot, giving his side a goal inside of two minutes. It was all Western Halifax FC would need as it beat FC Winnipeg Lions 1-0 in the Challenge Trophy final.

Winnipeg stuck a ball in the back of the net just seconds after the referee blew the whistle to end the game, but it looked like some of the Halifax players had already gone into celebration mode as the ball went in.

Some familiar names with Halifax: Centre back Shawn Kodejs, a former member of TFC’s Academy; and Jhonattan Cordoba, who was a trialist with FC Edmonton back in 2012.

Now, a lot has been said in the last couple of months over how soccer is covered in Canada; most of that has come from the perceived lack of love for Toronto FC’s run to the MLS Supporters’ Shield. Now, it’s hard to complain about mainstream media coverage (or the lack of it) when the industry has fewer and fewer staff by the day, but it would be nice if Canada’s soccer community as a whole paid more attention to the national senior championships.

Where to start? I’ve advocated for it in the past, and I’ll do so again here: When it comes to the men’s side, the senior national championship winner should have a berth in the Canadian Championship. Western Halifax FC deserves to have a shot at the Voyageurs Cup. Last year, when Edmonton Scottish won the title, the club was strong in its opinion that it deserved a ticket to the Voyageurs Cup.

Without coming off too much like a broken record, every Cup tournament needs its underdogs — it needs the chances for Cinderella stories to unfold. Adding teams from the semi-pro ranks in Ontario and Quebec, that’s a good first step. But, notwithstanding the arrival of the Canadian Premier League teams, the Canadian Championship would only get another added layer of intrigue if the top men’s amateur side was allowed to compete. Many of these winners have players who have been in the past linked to pro and collegiate teams; they surely would enter a Canadian Championship as heavy underdogs, but it’s hard to see them embarrassing themselves.