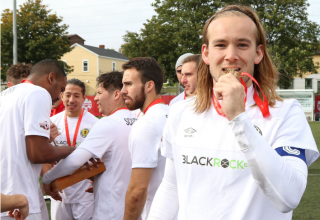 Edmonton Scottish finally won its first-ever Challenge Trophy in 2016. And the coach believes that Canada’s senior men’s champion deserve an even greater honour; a chance to play in the Voyageurs Cup…

A team finally wins its first championship in its fourth appearance in the final. The winning goal comes deep into injury time, from a player who had been advised by doctors not to take part in the tournament.

This isn’t the story of an MLS Cup or a professional championship. No, this is the tale of Edmonton Scottish’s quest to win the Challenge Trophy, which goes to the top senior men’s amateur side in the country.

On a cold Thanksgiving Day in St. John’s, Nfld., Steven Wheeler scored in the 94th minute to give Edmonton Scottish its first-ever senior men’s amateur title. But the fact that Wheeler was even on the field was remarkable in itself — he had a bad hip that needed surgery, and was advised by doctors not to play. But Wheeler had missed Scottish’s two previous trips to the Challenge Trophy finals, either through injury or because of his commitments to his job as an Edmonton firefighter. He wasn’t going to miss the 2016 tourney,

Wheeler’s goal gave Scottish a 1-0 win over Royal Select de Beauport, the Quebec champions who had beaten Edmonton in penalty kicks to claim the 2012 title.

Scottish coach Kevin Poissant took the job in 2009; the 2016 tournament marked the third time he’d steered the team out of the Alberta Major League, through provincials and all the way to the final. But, until 2016, Scottish had been been the tournament’s heartbreak kids. Three previous times the team had made the final — 1992, 2012 and 2015 — and it had two one-goal defeats and a loss in a penalty shootout to show for its efforts.

But there would be no silver lining in 2016; only gold. With former FC Edmonton players Sam Lam, Chris Lemire, Chris Kooy and Paul Hamilton in the fold, Scottish got the national title that had previously eluded the club.

The game turned in the second half, when Beauport’s Jamal Berbèche was sent off for a bad foul on Lam. It allowed Scottish to ramp up the pressure, and it finally paid off with a set piece when it looked as if the game was going to injury time.

“Throughout the tournament, Quebec consistently put players behind the ball and looked to hit on the counterattack,” recalls Poissant. “When they went a player down, they lost that ability to counterattack. From that point, they were always looking to extend the game, to maybe nick a late goal, to look to take it into extra time or penalties. Their big goalie had already made some good saves.”

Beauport’s team featured Samuel Georget, who, after coming to Canada from France, won the CIS Player of the Year award and was scouted heavily by FC Edmonton and the Montreal Impact, but chose to stay in school because, well, a real career would offer better long-term prospects. But Georget, unlike 2012, was neutralized in the 2016 final. He was limited to one good free-kick chance in the first half.

Poissant says a lot of the credit has to go to Hamilton, the rock in the centre of the Scottish defence.

“They tried to go over the top, but Hamilton was too good,” says Poissant. “He was too good in one- v-one situations.”

Hamilton was an NASL Best XI selection when he played for FC Edmonton, and later played for the Carolina RailHawks before pulling the plug on his pro career. His story is similar to a lot of the former pros or youth national-teamers who regularly appear in the Challenge Cup. They could give the pros a try and make really piss-poor money and have to travel abroad — which is OK when you are single, but not cool once you decide to settle down. Or they can decide to get a real job which pays better, and make soccer a passion project.

Wheeler, the goal scorer, was a U-17 Canadian international before embarking on a career path that took him to fire halls rather than soccer pitches.

Poissant feels so many elite senior amateur players could resurrect — or start — their pro careers if they would be allowed to maintain proper work-life balances.

“Players like the ones we have can be the foundation of the Canadian Premier League. In some ways,I think I’d like to see it start off as semi-pro, for at least the first one or two year. There’s a requirement to be full-time that might keep some players away. But I think of a player like [former FC Edmonton fullback] Niko Saler, who is working on his Masters but has the talent to play at that level. If he could make it work.”

Saler is with another Edmonton side, Green and Gold, which is tied to the University of Alberta. Former FCE keeper Jaswinder Gill also plays for Green and Gold.

Poissant says more than half of his senior players coach in the team’s youth ranks. On Sundays, which are game days, the players and their families all get together at the team’s south Edmonton compound — which, a generation ago, was surrounded by farmers’ fields, but is now bordered by subdivisions and strip malls.

Poissant says his loyalty to the Scottish “family” may have hurt the team’s chances in the past, but that it was the right thing to do.

“I could have been more ruthless and maybe some of those previous silvers would have been gold. But I care more about the players as people than I care about my own résumé. What satisfied me is that we were able to win without me having to change my foundation of what I am as a coach.”

The Challenge Cup’s schedule poses a lot of issues for the teams involved. Because all the teams save for the hosts have to travel great distances and book hotels, pay for meals, etc., the tournament is condensed into as short a time frame as possible. Scottish raised nearly $50,000 through sponsors and fundraising to make the trip to Newfoundland.

So, the schedule, year after year, is almost inhumane. Scottish, as a seeded team, had the luxury of one off day in the tournament. That meant, get this, five games in six days. Unseeded teams don’t get the luxuries of off-day. They play games with the same kind of frequency you’d see at a slo-pitch tournament.

“Talk about health is thrown out the window, all of the teams that advanced are the ones that managed to stay injury free,” says Poissant.

Scottish did have an ace in the hole. Centre back Richard Klein is a physiotherapist by day, and he worked with his teammates to get them ready, day after day. They got off the field and got into the pool, working to regenerate and recharge for the next day’s game.

Currently, only Canada’s unaffiliated pro squads get the chance to play for the national championship. It’s a closed competition, which has been limited to five teams over the past several years.

Poissant wants to see more of an open cup competition; he also thinks teams like Calgary Foothills, which got to the PDL final in 2016, should get an invite. He’d love to see Scottish play Foothills in a Cup tie. And if everything worked out and a Scottish/Toronto FC or a Scottish/FC Edmonton match-up would be on the cards, he believes that his side would make his opponents work their hardest.

“For sure, we would love that opportunity,” says Poissant. “I think that, given enough training time, I don’t think the game would be a walk. We have a lot of former professional team players, a lot of former national-team guys. What makes for a classic cup competition is the idea that any team can make it there.”

Because Challenge Cups are filled with so many former pro or former-youth national-team-level players that chose families and careers, Poissant believes that the winners of the trophy would give a good account of themselves if they had to play pro teams.

And heck, who wouldn’t love the idea of an FC Edmonton/Scottish derby, with many former FCE players facing their old team?