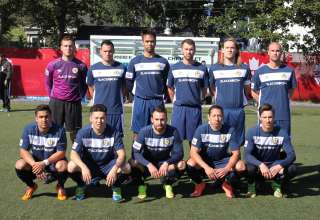 It’s been a hell of a Thanksgiving weekend for Edmonton’s soccer community.

An injury time shot from Steven Wheeler went into the roof of the net to give Scottish a 1-0 win over Royal Select Beauport in the final, held in St. John’s. For Scottish, it was sweet revenge for the 2012 final, which it lost to Beauport in penalties.

The game turned in the 59th minute, when Beauport’s Jamal Berbeche saw a straight red for a poor challenge on Lam. Beauport, who came into the final with the best defensive record in the Challenge Trophy tourney, held fast until stoppage time, when a bouncing ball got behind the back line and Wheeler was able to latch onto it.

Beauport could have had a lead by halftime, but Scottish keeper Jay Vetsch robbed both Philippe Renaud and former CIS player of the year Samuel Georget. But Vetsch had to leave the game at halftime due to injury; he was replaced by Francisco Wong, the fullback who deputizes Vetsch.

For Beauport, the loss to Scottish spoiled a chance for a clean sweep of national titles. The women’s senior side captured the Jubilee Trophy earlier in the day, beating Richmond FC by a 2-0 count.

Lea Chastney-Joseph was the star of the women’s tournament, scoring five times in five games for Beauport.