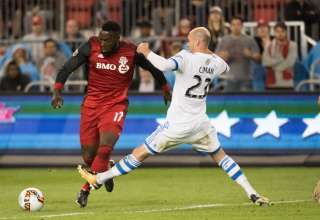 Look, America, it’s tough to miss a World Cup. It stings for now. But, if you’re gonna survive this, you need to learn to laugh about it. You’re going to need to deal with the new reality.

Trust me. I’m Canadian. And, as a Canadian, I know all about missing (men’s) World Cups. Heck, we normally don’t get as close to a World Cup as you got in this latest cycle.

So, as a Canadian, let me give you some advice on how to cope, and all the crap you’re gonna deal with as we get closer and closer to the World Cup.

Iceland
As a country that misses World Cups regularly, we were on top of the Iceland story as the small island nation took over its qualifying group for Euro 2016.
We were constantly reminded about how small Iceland is. And how advanced Icelandic coaches are. And the availability of pitches was touted, even though you have to dodge a White Walker or two. We asked ourselves “why can’t we be more like Iceland?”

Now, my American friends, it is your turn. Join us at the altar of Iceland worship. You are going to hear all about Iceland this and Iceland that. There will be long-form thinkpieces about Iceland’s footballing rise. They’ve been done before, they’ll be done again. I am sure that, by now, Iceland has guided tours of all its football grounds for fawning visitors. By the time the World Cup comes around, you will be so sick of comparisons between tiny Iceland (pop. 13; 18 million if you count the sheep) and your soccer program that the sound of slow claps will cause cold sweats. You will delete all the Bjork and Sigur Ros songs from your Spotify accounts. And, above all else, you will go into the World Cup thinking “ANYBODY BUT ICELAND.”

Dragging you down
One of the great joys of being a non-World Cup country is cheering on when other major soccer nations fail to qualify.

Netherlands, Chile, Cameroon… and maybe Italy! How awesome would it be for them to join us in the pile of near misses and flameouts? Feel bad about Christian Pulisic not making the World Cup? Well, Dwayne De Rosario never made a World Cup. And, so, don’t be afraid to take joy in Dutch tears and Alexis Sanchez’s rage.

If you’re going to go down, you can either hold your head high and say “there’s always the next cycle.” Or, you can go low and revel in the undeniable truth that missing out is so much easier to take when other big names join you in the basement.

No, that wasn’t us you heard cheering from over the border when the scores from the final round of CONCACAF qualifying games all went to full-time. You guys must have been hearing things. Maybe there was a hockey game on.

New rivals
Don’t think of losing to Trinidad and Tobago as falling victim to a terrible upset. Think of it as “finding a new rival.” You’re used to measuring yourselves against Mexico and, well, no one else in CONCACAF.

What fun is that? As a Canadian, I can tell you that not being assured of a win against pretty well any CONCACAF nation is pretty thrilling. You sweat out early-round games against Caribbean minnows. A road games in El Salvador? A draw is good!

Because you always get to skip the early rounds of World Cup, you miss the best of what CONCACAF has to offer. You don’t know that Benny’s is your No. 1 store. You’ve never watched a game from Belize on Channel 5. You’ve never cursed a choppy stream of a game played in Saint Lucia. Nothing brings soccer Twitter together like a good group discussion about the  “buffering” display we’re all watching instead of, well, a game.

See, our Caribbean geography knowledge is pretty good — not because we Canadians all like to vacation there, but because we have to play the likes of Dominica and Saint Lucia and St. Kitts and Nevis in order to move on in World Cup qualifying. Isn’t the risk of sliding down the world rankings exciting? Now you can bite your nails when you face a small nation you can’t find a map. It makes soccer more interesting! Really!

Decisions, decisions
Of course, when your program doesn’t make a World Cup, young players start thinking about other countries. A player gets a passport from a foreign World Cup-bound land because his dad once knew a guy who lived there for, like, six months. Or maybe the player can prove that a great, great grandfather of his best friend once lived in (PLACE COUNTRY NAME HERE), so now said player should be eligible to play for (PLACE COUNTRY NAME HERE).

You see, in Canada, we freak about basically every young player who hasn’t got a senior cap in an “A” game. Wait, did our 17-year-old phenom just tweet that he idolizes Thierry Henry? He must want to play for France!

The problem is, our fears are often realized. We have seen many raised-in-Canada players move on and play for other nations. Bosnia and Herzegovina’s keeper grew up in Edmonton and can pretty well tell you anything and everything about his beloved Oilers. We coulda had a shot at a guy who just got his first cap for Italy. We are freaking about a young talent who could leave the Canadian program for Cote d’Ivoire. You might remember that we once lost a striker to the American program.

Every time a player gets his first Canadian cap, we cheer. We have caught our white whale. Except, as soon as it’s out of the way, we then fret about another player. For us, there’s always another whale.

Now, I know Americans aren’t immune to the “will he play for us?” thing. But, face it. You guys have won a lot more than you’ve lost. That could change. That comes with being a non-World-Cup nation. In a few years, we can get together for beers and talk about the ones who got away.

Cheer for TFC
It’s not quite like watching your favourite players in their national-team jerseys, but Michael Bradley and Jozy Altidore will try to rebound from the World Cup failure with a run to MLS Cup with Toronto FC. You can join with a large group of passionate fans in cheering on the Reds. Heck, the U.S. national team had a red kit, as well, didn’t it?

Spoiler alert: Most of the TFC supporters are Canadian. Ugh. I know. We all have to make sacrifices, sometime.