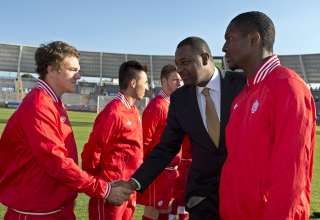 If CONCACAF president Jeffrey Webb gets his way, the 2026 World Cup will be played in the CONCACAF region.

Speaking in a press conference prior to the opening of the 2013 Gold Cup, Webb was asked about the potential of the tournament returning to the region for the first time since the United States hosted in 1994 with Webb admitting he’s already spoken to the heads of the Mexican and American federations as well as Victor Montagliani from the Canadian Soccer Association about such a possibility.

“It doesn’t matter — for me or one of the 41 members, whether it’s the United States, Mexico or Canada, I believe it is too important for us to host the World Cup in 2026,” Webb said emphatically. “And that will have been 32 years, which would have been the longest time since World War II that we have not hosted the World Cup as a confederation.”

The United States were runners up to Qatar for the rights to host the 2022 World Cup and Webb said the CONCACAF region were the biggest losers when FIFA decided to stop rotating the rights through the confederations after awarding 2014 to CONMEBOL and Brazil.

Naturally, the optimist would be delighted at the prospect of Canada hosting a World Cup but with a massive injection of money that would be required for stadium infrastructure and the high possibility of white-elephant venues at the conclusion of the tournament, it would be a tall ask for Canada to front a tournament by itself. But both Montagliani and CSA General Secretary Peter Montopoli have strongly hinted that Canada will have an all-in bid in place.

Naturally, a joint bid by Canada and the United States would likely be a success at the organizational level on and off the field, FIFA hasn’t wanted a joint host since 2002 and given the opportunity, the USSF would like the tournament all to itself.

To Webb, it doesn’t matter who hosts as long as it’s in the region.

“We collectively must make an effort. We must decide, ultimately, that it doesn’t matter which country within CONCACAF hosts it. We’ve said it very clearly from the outset: 2026 must belong to the confederation,” he said.

With Sepp Blatter set to relinquish the FIFA presidency, a new regime is set to take over.

The wheeling-and-dealing nature of FIFA is well known and Webb has no problem with throwing CONCACAF’s clout around and support someone who’s willing to play ball with the confederation.

“For us, of course, it comes down to sports politics,” Webb said. “I’ll be very frank and very open with you: whoever the next president of FIFA becomes, for any support to come from CONCACAF, that must be one of the overarching objectives, a commitment to this confederation that 2026 will come to CONCACAF.”

There is no bigger tournament in soccer than the World Cup and after successfully hosting the under-20 tournament in 2007 and the upcoming Women’s World Cup, the fact that Canada’s mentioned as a possible host for the tournament is encouraging.

Logistical and cost roadblocks aside, hosting the tournament would be a tremendous opportunity to show off the country and its ability to stage massive international events.

But given Webb’s stated and frank admission to see the tournament played in the region in 2026, it’s an encouraging sign that Canada is mentioned as a potential candidate and it’s clear from the comments of the relatively new president that any bid would have the confederation’s full support.