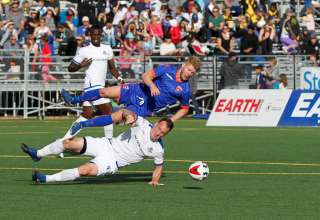 It seemed like an innocuous play; in the first half of Saturday night’s NASL match between FC Edmonton and Miami FC at Clarke Field, Eddies striker brushed against keeper Daniel Vega. Miami’s goalie hit the turf awkwardly, clutched his shoulder, got some treatment and then bounced up and got on with the game.

In Ameobi’s mind, that would go on to have a huge effect on the second half. With the score 0-0  between the Eddies, playing their third game in eight days, and the first place visitors from Miami, Ameobi leaped to get to a corner from Mauro Eustaquio. He powered the ball into the top of the goal. The Eddies celebrated. But Barrie waved the play off.

He ruled that Ameobi had pushed a Miami defender.

“He said there was a push, but there was just the usual hustle and bustle in the box you usually get every game,” said Ameobi.

So, instead of going up a goal, the Eddies celebrations were cut short. And, with just over 10 minutes left, Miami got the goal that would give it a 1-0 win.

Kwadwo Poku, who has long been an Eddies tormenter, dating back to his days with Atlanta Silverbacks, was able to dash past centre back Albert Watson and squared the ball for striker Vincenzo Rennella, who got to the ball just before Eddies defender Pape Diakite.

It was basically the only time Diakite was beaten all night. For most of the game, he repelled attack after attack, and enjoyed his best game of the season. He wore the captain’s armband due to Nik Ledgerwood being out of the lineup due to injury. And, after the game, Miller said that Diakite might keep the captain’s armband, based on how he led the team on the night.

But Miller’s praise for Diakite came through gritted teeth, as he was still angry about the foul call on Ameobi.

“We put in a shift tonight,” said Miller. “We were robbed.”

He said Barrie made a “disgusting decision. He’s the only one in the park who’s seen it.”

The loss overshadowed a fine performance from Nathan Ingham, making his second start in a row for the Eddies in goal. He made an excellent leaping save to deny Jaime Chavez and a diving stop to deny Renella before he was victimized on a goal he could do little about.

“It was a broken play that became a two-versus-one,” he said of Miami’s goal. “It was well worked by them, but it hurts.”

Ameobi said the Eddies will recover from this; and he’s noticed that the team spirit has been much improved over the last couple of games, including Wednesday’s 4-2 win over the Cosmos.

“It was a bitter pill to swallow, especially after having a disallowed goal. But you can’t fault the guys. Every single one of them, even the guys who didn’t make it on the field, you could see everyone was behind each other, which we probably didn’t have at the start of the season. But, over the last two games, things are definitely on the up for the team.”