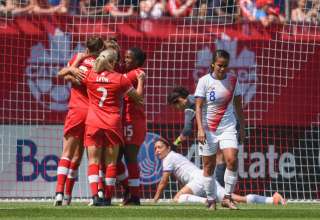 In the aftermath of Canada’s 6-0 win over Costa Rica Saturday at Toronto’s  BMO Field, I had two ledes in my head.

There was the obvious one: That, on a day when Canada Soccer honoured five retiring veterans — Kaylyn Kyle, Lauren Sesselmann, Robyn Gayle, Josee Belanger and Jonelle Filigno — it was the kids who made themselves count.  Janine Beckie, age 22, had a hat trick, 16-year-old Jordyn Huitema had two and 18-year-old Deanne Rose opened the scoring.

The other lede I kicked around was comparing this Canada home friendly to the kind of home friendlies were used to seeing from the United States, where a lower-ranked nation is brought in to be cannon fodder for a game that feels more like a celebration than a competitive event.

It was obvious right from the get-go that this one was not going to be as close as Canada’s 3-1 win over Costa Rica in Winnipeg that opened this two-game series of friendlies. Canada pressed right from the outset and the Costa Ricans, for some reason only known to their coaching staff, decided to play an extremely high defensive line. Time after time, Canada was able to play strikers through the back line that was far too aggressive, and Costa Rican keeper Noelia Bermudez was hung out to dry.

Rose opened the scoring just a couple of minutes in, getting to a low cross at the near post before the defenders could catch her.

Then it was the Beckie show.

First, she was sprung by a great pass from Jessie Fleming, and she chipped Bermudez to give Canada a 2-0 lead.

Then, Beckie found herself on another breakaway. And this is where it gets kinda funny; Bermudez came well out of her goal to challenge Beckie and, after being chipped the last time around, she leapt. She guessed that Beckie was going to try and chip her again. Instead, Beckie rolled the ball right under the keeper.

Beckie made it 4-0 with a smashed volley that gave Bermudez no chance. All credit has to go to veteran Christine Sinclair, who cushioned the ball over to Beckie, allowing the young forward all the time and space in the world to complete her hat trick.

It only took Beckie 15 minutes to register three goals. That was the fastest hat trick in the history of Canada’s women’s national team.

The Huitema show came in the second half. Being a good, apologetic Canadian, I think it needs to be said that maybe, just maybe, her first goal shouldn’t have been allowed to stand. Ashley Lawrence came down the wing and sent in a low cross that caused havoc in the Costa Rican penalty area. The ball ricocheted off Nichelle Prince’s backside and popped into the air in front of the goal line. The ball then hit a Costa Rican defender, and while Huitema got a touch to get it across the line, it came as she basically shoved that opposing defender into the goal.

There was no doubt about Huitema’s second goal, scored less than a minute later. She slammed the ball high into the Costa Rican goal.