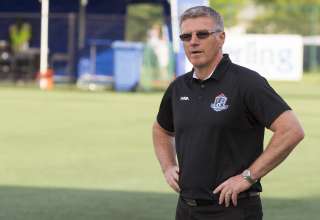 Fullback Netan Sansara, captain Nik Ledgerwood and midfielder Dean Shiels missed Wednesday’s win over the New York Cosmos due to injuries. And, now, midfielder Dustin Corea is a doubt for Saturday. And defender Adam Straith is away with the Canadian national team.

“That’s why we haven’t named the team today,” Miller said after Friday’s training session. “There’s one or two doubts in the guys who trained this morning. Dean Shiels and Dustin Corea are definitely doubtful for tomorrow. It’s one of those things where it doesn’t matter who plays tomorrow, it’s an opportunity for every player that does take the field, because some of worked very hard and haven’t had very much playing time. We’re optimistic one or two might make it, but there’s still a serious doubt about one or two of them. We may have a squad of 16 or 17 tomorrow night.”

Miami FC spends the most money in NASL and is getting bang for the buck in 2017, as Alessandro Nesta’s men have lost just once in 10 matches. The budgets of FCE and Miami don’t compare, but Miller said the league isn’t about comparing payrolls — it’s about what happens on the field.

Miller said we all need to think back to 2012, when an unfancied Glasgow Celtic side beat Lionel Messi by a 2-1 count. It pained Miller to talk about that game, because he’s a former Rangers player and his heart bleeds blue for that club.

“Who would have ever thought that a club from Glasgow would have beaten absolutely one of the best teams, if not the best club team, in the world at that time? Because of the atmosphere, because the crowd was so passionate that night, you have to take your hat off to Celtic. I was just reading about it the other day and it made me think that anything is possible. This is not Barcelona that we’re playing. They’re a good team, they’re well-prepared, they’ve got some terrific players on their team, but so do we. And it’s what we do, again. Our mindset has to be positive. If we sit back and wait to get beat, you’ll get beat.”

More than 3,800 tickets have been sold for Saturday’s game. Clarke Field’s official capacity is 4,096.