FC Edmonton has confirmed that the planned upgrade to Clarke Stadium will likely not happen in time for the May 27 home game against the San Antonio Scorpions.

The reason? Paperwork. The team doesn’t yet have the permits needed to put up the temporary stands that would see Clarke’s capacity boosted from its existing 1,200 bench seats to 4,000 — with room for as many as 1,000 more fans on the grounds. Many of the new seats will be reserved seats with chair backs.

But the team also made it clear that there is no prejudice on the City of Edmonton’s part. “Due process” are the words coming from the team’s front office. The wheels of bureaucracy don’t turn very fast — that’s simply the nature of civic government. 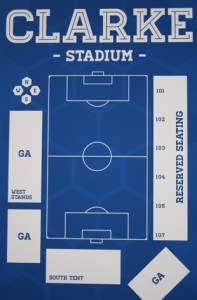 In late March, FCE finally confirmed the rumours that had been swirling for months , that the team was moving out of the University of Alberta’s to Clarke, located next door to Commonwealth Stadium and the brand-new, state-of-the-art fitness centre. But Clarke seats just 1,200 in one stand of benches. So, plans were announced to boost capacity to nearly 5,000 with addition of new temporary stands, a beer garden and a children’s play area.

But, because of snowy, slushy weather that continued into April, the ground was deemed too soft on which to build, and FCE played its first two NASL home games in the exisiting Clarke configuration, with crowds in the neighbourhood of the 1,200-person capacity. In fact, the team has not been promoting the home games as heavily as it could be because of the seating limitations at Clarke.

Now is a critical time for the club; while the delays didn’t hurt all that much early in the season — FCE had just two league home matches scheduled through the first month and a half of the campaign. But, after this Saturday’s road match in San Antonio, the Eddies will then be on a three-week homestand that will see it play at Clarke on three consecutive Sundays starting on May 27.