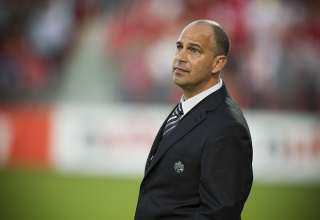 Canadian men’s national team coach Stephen Hart had been stating over and over not to expect too many surprises when he unveiled the roster for a June 3 friendly against the United States and two World Cup qualifiers to follow.

So, we shouldn’t be surprised that we weren’t surprised. For the most part, it’s a squad very similar to what we saw through the first phase of World Cup qualifying, which saw Canada eliminate St. Lucia, St. Kitts and Nevis and Puerto Rico.

Of the 22 men named to the roster, only two — teenager Samuel Piette and veteran Issey Nakajima-Farran, who plays in Australia — would be considered eyebrow-raisers.

Piette, at 17, was a major part of Canada’s team at last year’s U-17 World Cup and the recent U-23 squad that came within one game of securing a berth at the London Olympics. He is reportedly close to a deal with Fortuna Dusseldorf, who earlier this week secured its return to the Bundesliga.

“We’ll see how he does,” Hart said during a conference call on Thursday. “He did play well at the under 23s, he passed the ball well, he played positionally well.”

And, as for Nakajima-Farran, Hart said the Calgary native has impressed in the midfield of A-League powerhouse, Brisbane Roar.

“He adds a lot their attack, and he scores goals,” said Hart.

Nakajima-Farran wasn’t part of the national-team set up through the first round of World Cup qualifying. But Hart was also impressed with his versatility. Hart said the Roar uses him as an attacking midfielder behind the strikers, but also out on the wing. And that ability to be a chameleon on the pitch makes him valuable.

The fact that Bernier’s become a depth player for Impact coach Jesse Marsch hindered his chances of playing for Canada.

“He’s a little bit disappointed…” said Hart. “He came off a difficult injury and he has not been playing consistently.”

And, as for Dunfield, Hart said he already has a variety of midfielders who have the same skill sets as the Toronto FC man.

“I didn’t want too many similar players,” he said.

But, Hart allowed that there are still many MLS matches to be played before camp opens in Florida in May (and when MLS players have to report as per FIFA rules). So, if Canadian players get banged up, Hart does have a reserve list of players to draw upon.

After the U.S. friendly, Canada goes to Havana June 8 for a match with Cuba, then hosts Honduras June 12 at BMO Field.