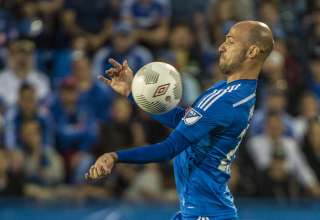 Even the most seasoned soccer prognosticator would look at the Montreal Impact and say “no way can I figure this team out.”

Throughout 2016, from week to week, it’s been impossible to get a real indication of what this team is about. The Impact lose home games to the likes of the Chicago Fire and New England Revolution, but go on the road and win in Toronto. Just when you think the Impact can’t get any worse, the Impact gets worse. Then, all of a sudden, the team looks like a contender. Then bad again. Then good.

On Thursday, the Dr. Jekyll Montreal Impact went to Washington. The Impact throttled D.C. United 4-2 in their MLS playoff opener, and earned a date in the Eastern Conference semifinals against the New York Red Bulls.

“We were focused on our task, and that’s what we saw on the field tonight,” said Impact head coach Mauro Biello in a release issued by the club after the match. “Our team was ready to fight and to do what it took to win. I congratulate my players on what was probably their best performance of the year. Now, we turn our focus to an important game on Sunday.”

The 4-2 scoreline flattered the home side, as the Impact were up 4-0 at the 89-minute mark. The Impact’s dominance was so absolute to that point, that you can’t really blame Montreal’s players for letting their game slide for the last few minutes of the match.

The rout started early — just three minutes in — with defender Laurent Ciman side-footing the ball into the goal after a corner kick grazed the head of D.C. United’s Nick Deleon and fell to the Impact’s Belgian centre back.

The Impact’s second goal, scored a couple of minutes before halftime, was sublime. Ignacio Piatti had the ball at the top of the box. Striker Matteo Mancosu was also at the top of the D.C. United’s penalty area. Then, perfectly timed, Piatti fed a ball into the area just as Mancosu began his dash, catching the home side totally flat-footed. Mancosu finished the chance. The run and pass were timed so perfectly, you would have sworn that he and Piatti had been playing together since they were kids.

Mancosu got his second of the game at the 58-minute mark, nodding home a cross from Ambroise Oyongo.

And, with D.C. pressing for a consolation, Piatti got a goal after Mancosu squared a ball to him on the break. The two were off on a two-on-one-break, but looked as if they’d let the chance go to waste. DCU’s defenders were able to catch up to the play and scramble back in the area. But, with a two-on-one transformed into a two-on-four, Mancosu’s passed skipped through some legs before Piatti guided it home.

Piatti deserved a goal for his masterful efforts on the night, pulling strings and confounding D.C. United’s defenders with his ball-handling skills and his passing ability. He was a joy to watch.

Lamar Neagle and Taylor Kemp got late consolation goals for the home side. But, really, from almost the first kick of the game, this match was never in doubt.

So, both Toronto FC and the Impact survived the first round of the MLS playoffs. And, while both would need to pull off upsets in the semifinals over the two New York teams for it to happen, the hope for a 401 Derby to decide the Eastern Conference is still alive.

We’ll just have to wait and see which Montreal Impact team shows up this weekend.