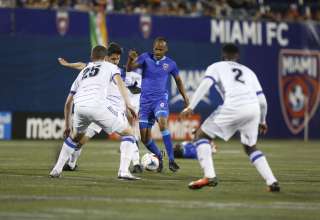 Ariel Martinez is going to join the likes of Tom Heinemann and Dylan Mares on the “guys who always seems to light it up when they play FC Edmonton” club.

For the second time this season, a lashing drive from Martinez gave Miami FC a win over the Eddies. His 66th-minute lashing drive was the difference as Miami FC beat the Eddies 1-0 in Friday night’s regular-season closer in south Florida. Martinez got hold of a bouncing ball on the turf, was able to spin by central defender Marko Aleksic, and then beat Eddies’ keeper Tyson Farago with a vicious shot into the bottom corner of the goal.

In the spring season, Martinez gave Miami FC its first-ever NASL win when he scored against the Eddies from 25 yards out.

“He’s a good player, he’s a genuine threat,” said FC Edmonton coach Colin Miller. “But, I am very disappointed in the quality of the goal that we gave away. They missed the net on better chances, and hit the post as well.”

But, to be fair, it needs to be stated that the Eddies went to Miami with their eyes firmly on the next weekend — and the Championship Semifinal date in Indy. No member of the Eddies’ regular starting back four played in Miami Friday night. Regular starting keeper Matt VanOekel didn’t make the trip. Veteran attacker Daryl Fordyce didn’t play. With the Eddies having clinched the No. 3 seed weeks ago, coach Colin Miller knew he could use the final weeks of the season to best prepare his side for its first playoff game since 2011.

“I’m disappointed with the result but proud with the effort,” said Miller. “We left seven starters back home in Edmonton. We were beaten by a better side tonight. The players knew they were going to be up against it, tonight.”

But Miller said some  of the players who featured tonight for the Eddies will need to show better in training if they want to be on that post-season road trip to Indianapolis. The team will leave for Indy on Thursday.

The home side had a chance early on to take the lead; Blake Smith lofted a ball into the box, and Farago wasn’t able to get to it before Miami FC’s Jaime Chavez got his head to it. The ball looped over the keeper, but came off the post.

Before 20 minutes were played, Miami hit the woodwork again; Kwadwo Poku smashed the ball off the bar.

Just a couple of minutes into the second half and Mason Trafford, Miami FC’s Canadian defender, headed a ball just inches on the wrong side of the post. Trafford, the Canadian who has played the most minutes in NASL or MLS this season, got to a corner kick and came oh so close to scoring.

Chavez then hit the post soon after the Trafford chance. So, by the time Martinez scored, there wasn’t a doubt that it was anything less than the hosts deserved.

Miami has established itself as FC Edmonton’s bogey team. Miami FC finished the season with a 3-0-0 record against the Eddies. The Eddies did not score against Miami in 2016.