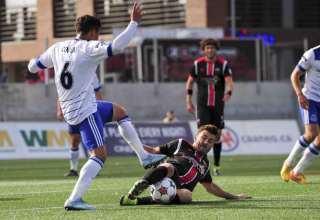 The Ottawa Fury clinched a spot in the NASL post-season. FC Edmonton couldn’t gain any ground in its heated battle for a post-season berth.

Sinisa Ubiparipovic’s brace gave the Fury a 2-0 win over the Eddies in front of 6,050 fans at TD Place. The win ensured the Fury a spot in the NASL playoffs, and puts the club five points ahead of Minnesota United in the fall-season table.

With the loss, the Eddies remain in a three-way tie (on points) with Fort Lauderdale and Tampa Bay for fourth spot in the overall table — which represents the final post-season spot. The Eddies and Rowdies each have four games left on their schedules; the Strikers have a game in hand and a far superior goal difference than the other two teams.

In the 23rd minute, Ubiparipovic had the luxury of what amounted to a tap-in from a few yards out. He was Johnny-on-the-spot after Paulo Jr. went down the left wing, blew past fullback Allan Zebie and rolled the ball into the Eddies’ penalty area.

The second goal required more perseverance from Ubiparipovic. In the 72nd minute, after a run down the right side from fullback Ryan Richter, the ball was played to the far side of the Eddies’ penalty area. It came to Ubiparipovic, whose first shot was blocked. But, the ball came right back to Ubiparipovic. The second time was the charm, as his shot was perfectly placed, giving keeper Matt VanOekel little chance.

Eddies coach Colin Miller congratulated the Fury for clinching its post-season spot, but believes his team is still very much alive in the race for November soccer.

“I said it before, that I still thing there are points going to be dropped by the teams at the top, so it’s up to us to take care of our house in our final four games.”

“I really can’t fault our effort,” said Miller. “I thought we played, for the most part, a good road game. Really, Matt VanOekel has had very little to do over the space of 90 minutes, yet we lose by two goals.”

He said both goals were a case of allowing too much space on the counterattack and not marking the Ubiparipovic when the balls were played in.

The Eddies made just one change from the lineup that started the previous weekend’s triumph over the Cosmos; Ritchie Jones came back into the XI because of Cristian Raudales’s suspension due to yellow-card accumulation.

But, much like their fall-season meeting in Fort McMurray, which saw the Fury win 1-0 on a last-gasp goal from Rafael Alves, the Eddies struggled to create chances. In fact, the closest the Eddies came was late in the match, when sub Thiago de Freitas’s drive crashed off the post. But, the caveat: That chance came after the Eddies were already two goals down.

Miller said he noted that the Eddies were better offensively late in the game after Sainey Nyassi had been brought in as a sub. But he admitted that the Fury are an awfully hard side to break down.

“I’m disappointed in the result, but I can’t fault the effort of their players,” said the Eddies’ coach.

The Eddies had a couple of half-decent free-kick attempts in the first half. A 30-yard effort from Dustin Corea swirled in the wind and forced a punch from Fury keeper Romuald Peiser; and a 25-yard strike from Lance Laing forced a diving stop from the NASL’s top keeper in 2015.

Truly, though, the Fury fans would be happy to know that the best Eddies’ opportunities were long-range strikes, and that strikers Daryl Fordyce and Tomi Ameobi (who came on for Fordyce in the second half) were left as isolated figures in the match. For the second meeting in a row, the Fury were able to go wide and take away the Eddies’ speed-and-counterattack game.

But, with the Cosmos and Fury already clinching two of the four spots, and Minnesota close to clinching another spot, it’s looking like the NASL might need to use the orange ball in its post-season. In a league filled with clubs from the American southeast, the north has definitely risen.