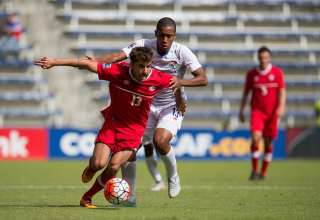 Michael Petrasso, in red, is seen in action against Panama. PHOTO: CANADA SOCCER

The good: The Canadian men’s U-23s beat Panama 3-1 Saturday in Kansas City, evening their record at 1-1-0 in the group stage of Olympic qualifying. With a final group-stage game left against the Cubans, the Canadians are very much alive in their dream to make it to Rio 2016.

The bad: For the second game in a row, Canada’s Achilles heel was evident. We knew that when we saw coach Benito Floro’s roster — which was devoid of any true pro-level fullbacks — that the wings were going to be an issue for Canada. But, wow, is it ever a problem.

Canada went into halftime of Saturday’s game with a 2-0 lead. Panama was down to 10 men, as forward Carlos Small decided to elbow Anthony Jackson-Hamel in the head for what appeared to be no reason at all.

But, Panama was able to make it 2-1 after winger Abdiel Arroyo was able to blow around Jeremy Gagnon-Lapare and cross the ball to Edgar Barcenas for a tap-in goal. A few minutes later. Gagnon-Lapare — in as a makeshift left-back — was at sea again as Arroyo crossed the ball to Jorman Aguilar. Once again, it was in the back of the net; but, luckily, for the Canadians, Aguilar was a foot offside when the ball was played.

Now, consider that Gagnon-Lapare conceded a lazy penalty in the tournament opener against the Americans, and coach Benito Floro would have had all the ammunition to sub him off. And, in the 71st minute, he did.

But Gagnon-Lapare is out of his element as a makeshift fullback. The coach, not the player, should take the lion’s share of the blame for the poor performance. And it only underlines the fact that Canada’s best two fullback options aren’t with the team. Allan Zebie, who was on the NASL team of the week for his performance last Sunday, was (inexplicably) not called, even though FC Edmonton would have been happy to let him go. When we saw the roster, we wondered where the fullbacks were. We can talk about Floro’s decision to not call Toronto FC’s Jonathan Osorio for the World Cup qualifiers against Belize. His decision to snub a starting NASL fullback — and a darn good one at that — for the Olympic qualifiers is just as bizarre.

And, no matter what is said from either the Whitecaps or Canada Soccer, Vancouver fullback Sam Adekugbe isn’t with the U-23s either. In the end, it doesn’t matter if you think the Whitecaps were right or wrong asking to have the right of recall for Adekugbe — and permission to send him to camp late. It doesn’t matter if you think Floro was right or wrong for refusing those terms. He’s not here.

The simple truth is If you have Zebie and Adekugbe on the flanks, that Canadian weakness isn’t evident. Instead, Floro is sending out makeshift fullbacks and hoping they can deal with the likes of Arroyo. And, remember that, in the opener against the U.S., Canada was torched down the wing on the Americans’ opening goal.

Everyone Canada plays in this tournament, everyone, is going to focus on getting the ball wide on this team.

Look, I should be a lot happier than I am after this game. After all, the game featured a lot of things that usually never go Canada’s way when it plays in CONCACAF tournaments. For one, Canada managed to score three times despite spurning early chances. Had Caleb Clarke and Michael Petrasso not put their point-blank efforts at the keeper early in the first half, Canada could have been four up at halftime.

Petrasso would open the scoring thanks to a wonderful through ball from Clarke.

And, well, usually when a Canadian player is assaulted, CONCACAF refs turn blind eyes. We’re used to that. So, to see Small get red-carded after elbowing Jackson-Hamel, well that was a change.

And the second goal, a header from Skylar Thomas, it required the kind of luck Canada usually doesn’t get. The ball went off the post and was actually going away from goal on the rebound. But some kind of magical backspin grabbed hold of the ball, and then it took a turn and headed back across the line.

Canada’s insurance goal — which came after the Aguilar just-offside scare, didn’t require any luck. Ben Fisk took a lay-off from Petrasso and placed a perfect shot into the corner.

On the day, Canada’s offence was able to do well enough to cover for its terrible shortcomings on the flanks. And Petrasso, Clarke and co. will need to keep scoring. Because, against the better CONCACAF sides, this team isn’t built to try and hold the fort for a 1-0 result.