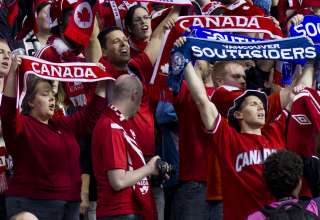 Earlier this week, The 11 posted a poll asking Canadian soccer supporters if the policies undertaken by American President Donald Trump and his administration would keep some of them from traveling to the United States for away games in 2017. You can fill that out here.

Well, we are starting to see how some supporters in Canada are reacting to America’s travel ban on those who come from any of seven targeted, majority-Muslim African or Middle Eastern nations. The Vancouver Southsiders posted this open letter on Tuesday night. They have stated that they aren’t asking their members to boycott away games in the United States, but there won’t be any “Caps on Tour” organized trips across the border as long as the current U.S. restrictions are in place. And, if fans independently choose to go down to watch games in Seattle, Portland or anywhere else in the United States, they’ve been asked not to show the Southsiders name or badge.

Here is the letter, in it’s entirety:

You should know these words well: “Boundary Road, take me home, to the place where I belong.”

As you may be aware, recent developments in the United States present some very serious and distressing implications for some of our members, both directly and indirectly.

Last night, the Executive Board and Ombudsman met in person to discuss our role in facilitating the away travel experiences which have come to be known as #CapsOnTour. We gave careful consideration to our Charter, our Code of Conduct, and an unprecedented amount of input from the membership.

We are in unanimous agreement with the following:

BUS TRIPS: The Executive Board shall not coordinate any bus trips to the U.S. until such time that the current conditions at border crossings have changed. We cannot in good conscience be responsible for arranging or hosting events or experiences which potentially come at the exclusion of some of our members, no matter how few in number those affected might be.

AWAY TICKETS: The Executive Board recognizes it has an obligation to continue facilitating access to match tickets for away games. It is important that we protect the ticket allocation we fought very hard to gain control of. We are also mindful that many members booked flights and hotels prior to these recent developments. As such, away tickets will become available once kickoff times have been finalized, and we will provide you with the information necessary to obtain them.

RESPECT: We have just one request – if you travel to a Whitecaps game in the US in the foreseeable future, we ask that you leave your Southsiders scarf at home as a sign of respect for members who cannot cross the border with the same ease and personal freedom as you do.

The Executive Board and Ombudsman shall continue monitoring the border situation and we will advise you if our position changes in the future. These are tumultuous and unpredictable times to say the least, which makes planning for the future extremely challenging. We will continuously assess our options and revisit these decisions when appropriate. Our ultimate goal is for all of us to move forward together in harmony and respect.

After all: “White is the colour. Soccer is the game. We’re all together.”