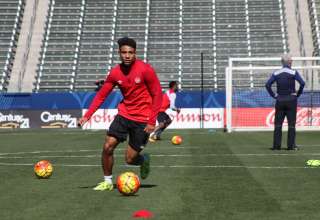 On Wednesday, the Vancouver Whitecaps announced that they had transferred Frose to Germany’s Fortuna Dusseldorf. The team stated it will receive a portion of any future sell-on fees and the possibility of receiving bonuses depending on the number of matches Froese plays for his new German side.

“This is a good opportunity for Kianz to continue his development both on and off the pitch,” Whitecaps coach Carl Robinson said in a statement issued by the club. “This move will also open a pathway for our young midfield players who are ready to compete for minutes.”

Froese was originally set to make the move to German side Mainz 05 back in early 2012; but, he’s finally got back to Europe in 2017.

Froese played in 15 MLS matches in just over two seasons.

Now, go back in time to the autumn of 2011; Froese, who had represented Cuba at the youth level, was pondering a switch to Canada — which he’d later complete. He inked a deal with FC Edmonton of the NASL, to train with the club until January of 2012, when, during the transfer window, he expected to head over to German side Mainz 05. At the time, both FCE and Froese said that if Mainz didn’t work out, FCE held right of refusal on the player — that is, if he returned to North America, he’d play for FC Edmonton. But, when he did come back to Canada later in 2012, he joined the Whitecaps organization. At the time, Sadi Jalali, who had made an agreement with the Eddies similar to the Froese deal, also appeared in Vancouver — but the Eddies admitted that they didn’t sign him to a binding contract.

Froese has since gone on to play twice for the Canadian men’s national team.