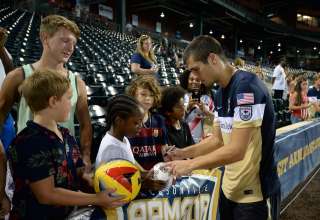 If you’re a Canadian player and want to try and nab a spot on an American NASL team, you will no longer be considered an import.

The 11 has learned that NASL is about to announce a major change to the league’s roster rules — Canadians will now be full domestics league wide.

Under the old rules, Canadians were only considered domestics on Canadian teams, but Americans were domestics on both Canadian and U.S. teams. For a Canadian to be domestic on an American team, he needed a green card. In the past, Canadian players have told stories of being told by coaches and general managers that they might have shots to make the rosters of American teams, if only they didn’t take up precious international spots. For example, Canadian keeper David Monsalve had a trial with the Jacksonville Armada in 2015, and was told that the team could only take him on if he got his green card. Domestic? He made the team. International? He had to move on.

Now, that will no longer be an issue.

The USL, newly promoted to second-division status (NASL is also second-division), has a longstanding policy of treating Canadians as domestics. Last season, Swope Park Rangers, an American USL side, started four Canadians in a USL match. Frankly, that would never happen in a system where Canadians were treated as internationals.

Nana Attakora and Karl Ouimette were recently signed to the San Francisco Deltas. They will not take up international spots.

Each team will still have an international roster limit of seven players.

Major League Soccer altered the rule for the 2017 season. It had similar rules to NASL when it came to Canadians being domestics in Canada, but imports on the American teams. But it made a series of rule changes that allow for Canadians in the Generation Adidas program to be considered domestics league-wid ‚ or if a Canadian player signs with an MLS/Canada Soccer approved academy before or during the year he turns 16 AND signs his first pro contract with an MLS team or an MLS-affiliated USL side.

The NASL and USL rules require no conditions. With both NASL and USL (which has MLS-affiliated “B” and “2” clubs in its membership) now recognizing Canadians as domestics league-wide,  the pressure will be on MLS to simply do the same, rather than have a series of criteria a Canadian player has to meet in order to be a domestic.

In 2016, Canadian keeper John Smits, formerly an NASL Gold Glove winner for best goals-against average in a season, signed with the USL’s Wilmington Hammerheads. Despite a good résumé, the former FCE keeper couldn’t get bites in MLS because of his passport.

“My agent told me that there was some MLS teams that showed some interest, but because of the foreigner rule, there’s no way they were going to use an international spot on a goalkeeper unless he’s a for-sure number-one,” he said.

With the number of Canadians still with Unattached FC (that is, free agents), the chances to approach more teams.

Seven Canadians who played in NASL in 2016 have appeared for the Canadian national team over the course of the last year. In total, 20 Canadians appeared in NASL games in the 2016 season — but that number could still decrease because NASL has gone from 12 to eight teams — and the Ottawa Fury moved to USL, leaving FC Edmonton as the lone Canadian NASL side.

UPDATE: NASL HAS NOW MADE IT OFFICIAL. Here’s a statement from the league:

“Canadian players have played a big role in the development of our league on the field,” said NASL Interim Commissioner Rishi Sehgal. “We believe that this change will help us become better contributors to the growth of the game, not only in Canada, but in the U.S. as well.”

“As one country improves, the other country will improve,” said FC Edmonton co-owner Tom Fath.  “It’s win-win for both Canada and the United States.”