May 16, 2022
9 New Articles
Home NASL & USL More NASL & USL Trafford on his move to Miami FC: From hesitancy to enthusiasm 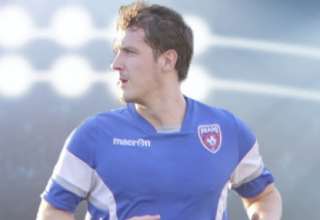 Mason Trafford was on vacation in southeast Asia when he got word from his agent that Miami FC was interested in acquiring his services. The NASL expansion team’s technical staff had identified the Canadian defender as one of the top defenders in the league, and wanted to pry him loose from the Ottawa Fury.

“I was hesitant at first,” Trafford said over the phone. “I was still fully committed to Ottawa, despite all of the changes that were happening at the team.”

But, the lure of being able to work under the eye of Miami FC coach Alessandro Nesta, one of the best defenders to ever play the game, was awfully powerful. And, Trafford was flattered that someone of Nesta’s calibre had looked at NASL tapes and identified the Canadian as one of his targets.

“I was one of the guys they really wanted; they wanted to bring me in. And when it comes from someone like Nesta, one of the best to ever play the position, it’s flattering.”

And then he saw that Miami FC didn’t want to be just another expansion team. It wanted to make a splash. Trafford made the move; Miami FC purchased him from the Fury, he got a new deal with his new club, and now he plays on a team that also includes ex-FC Sion midfielder Adailton and Honduran national-teamer Wilson Palacios.

Trafford was part of an Ottawa team that won the fall season and fell in the final to the New York Cosmos; he was sent off in that game. Before the season ended, though, coach Marc Dos Santos announced he was leaving; he was replaced by Paul Dalglish. But, the team was inundated with transfer requests, the NASL is filled with Fury diaspora. In Ottawa, it’s a question of who’s left — and the Fury is arguably a bigger question mark in 2016 than any of the expansion sides save Puerto Rico.

“I have nothing but positive things to say about Ottawa,” said Trafford. “They were very good to me and, in the two years I was there, we really built something special. But I am not going to lie; when the team is dismantled, it makes it easier to move on. A lot of the players, my good friends, had moved on. And so the emotional connection to Ottawa isn’t as strong. It’s not as strong an emotional connection if I would go to camp and only know a handful of guys.”

Looking forward, he knows he can offer Nesta some options. He’s comfortable at both left back and centre back — and being left-footed, well coaches are always on the lookout for solid left-footed players. And even though Nesta is still working to master his English, Trafford said the coach has no problem engaging his players.

“There isn’t really a language barrier. He’s not super confident in English, but he can speak. And, when he speaks, everyone listens. He doesn’t need to shout.”

And there’s another perk: When he trained in Miami on Friday, the temperatures were warm. He’d heard from friends in Ottawa of temperatures nearing -20 C. That part of Canada is under an extreme cold-weather warning from Environment Canada. So maybe it’s not too inaccurate to call Trafford a soccer snowbird.