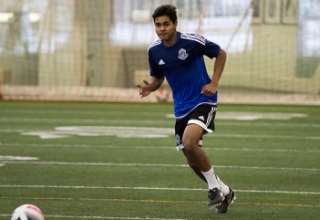 In the United States, it’s becoming common to see a player sign a professional contract after finishing only his freshman year of an NCAA program.

But, for a Canadian player to sign a pro deal after playing just one year at a CIS school? That’s certainly not a script we see played out very often. But, on Friday, FC Edmonton announced the signing of speedy midfielder Shamit Shome. A product of FC Edmonton’s academy program, Shome was Canada West’s Rookie of the Year for 2015 after a standout first season with the University of Alberta Golden Bears. Shome has also got looks from Canada’s U-20 program.

“I knew that I wanted to get back with FC Edmonton, and into the professional environment, a quickly as possible,” said Shome.

And, to do that, he made some very calculated decisions. He turned down offers from a couple of NCAA programs; instead he chose to play at the University of Alberta, where he could be closely monitored by the FC Edmonton brass. As well, he could remain close to his family, which was important to him.

“For me, I had to think, would it be better to go the States and play for four years and then hope that maybe I get taken in the draft and go to MLS? Or, would it better to try and get to the NASL as quickly as possible and start my professional career?”

And Shome said he understands that many NCAA grads who turn pro face huge challenges; they’re in their early 20s when they get out of school. And that means their window to make a pro team is very small; they’re already at an age where they shouldn’t be seen as prospects — they are simply too old to be taken on as project players by pro clubs. That’s why the MLS SuperDraft is, truly, such a crapshoot of twentysomething everymen — where even first-rounders often fail to ever get minutes. A lot of draftees will go no further than USL; and that’s not a future Shome wanted for himself.

But, even though he’s playing professionally, he hasn’t left school behind. That’s the nice thing about being enrolled in a university that’s a short ride away from where you work. He’s been able to balance his class schedule with his soccer schedule.

“Of course, FC Edmonton is my employer, so if there are any conflicts, they have to be the prority,” he says.

Shome is hopeful he can do more than simply be a good player in training. He says he would like to crack a game-day roster, then get onto the field to play some NASL minutes. But the club feels strongly about his potential.

“We knew from an early age with Shamit when he first started the program that he would be a player that we kept our eye on,” FC Edmonton academy technical director Jeff Paulus said in an FC Edmonton release. “Shamit had a real opportunity to become a professional player and he’s done that. I’m thrilled.”