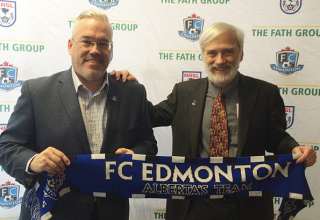 FC Edmonton’s staff say that newly announced general manager Jay Ball will take the next couple of days to assess his new surroundings before making any major statements to the media.

So, for those wondering “who is Jay Ball?” I can offer a little bit of fill-in-the-blanks. I first met Jay in the mid –‘90s, when I was the publications coordinator (a fancy term which meant I was the editor of the team magazine and fan newsletter) with the Edmonton Oilers. He’s been a press-box fixture at Oilers games for more than 20 years.

I have come across him in his time as the president of Junior Achievement (a spot he held for 11 years). He was also a big part of the marketing teams for the 2015 Women’s World Cup matches held at Commonwealth Stadium and cycling’s Tour of Alberta. He was the director of the ticket community program for the 2012 World Hockey Championships.

Before placing any quotes from a press release, I will say this: Jay is plugged in to the corporate community; I often see him at many charitable/community events in the city. His goal with FCE won’t be to handle players — that’s coach Colin Miller’s job, to make the player personnel decision. The new GM will be judged on how he engages a fan base in Edmonton that has only truly packed 4,500-seat Clarke Field a couple of times in this team’s history . He will be judged on if he can increase FCE’s presence with Edmonton’s corporate community.

Jay is a think-big kinda guy, the kind of guy that says “why not” rather than “why?” He sees Edmonton as a major-market city, not a second-tier place. That’s why, when Edmonton has an opportunity to host a major global event, you can find him, building bridges towards potential sponsors and helping devise ways to drive ticket sales. In a city that’s often discounted by others as a place where there’s a)hockey b)hockey c)more hockey, he’s helped get events off the ground that don’t have to do with whacking a puck around a sheet of ice. But, of course, understanding the hockey market and being around that culture definitely helps when trying to sell other sports in Edmonton (and, likely, other parts of Canada, too).

Of course, he takes the job when Alberta is suffering economically because of oil prices that have burrowed down to less than US$30 a barrel; and Alberta producers tend to get less than the market rate. The oil industry that Alberta’s economy is built on is shedding jobs and profits. But, at the same time, Edmonton is undergoing billions of dollars of new development, including the new downtown arena, office tower that will be Canada’s tallest building outside of Toronto, and new hotels needed to fill demand.

“I’m fortunate to be involved with FC Edmonton and to work with this energetic group of athletes, fans, and staff,” Ball said in a release issued by the club. “And I’m looking forward to keep building links to the Edmonton soccer community. I understand the sports world, I know the game and I’m excited to learn more and develop our front office team.

“The added benefit of this role is that I’m so deeply embedded in our community, I know the people within the corporate world very well,” Ball added. “I’m eager to jump in and help our front office immediately to boost our group sales and corporate relationships.”