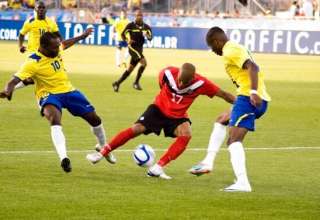 Tosaint Ricketts picked a fine time to score his first goal for Canada — an injury time strike to rescue a 2-2 result against Ecuador.

Trailing 2-1 at the 90-minute mark, Canada was desperate to push forward for the equalizer. A bad tackle led to a free kick for Canada. With Ecuador players surrounding the referee in protest, Julian de Guzman saw an opportunity to take a quick set piece and passed ahead to an open Ricketts. Although he was a little surprised at first, the late second-half substitute made two quick touches before slotting the ball past Ecuadorean keeper Marcelo Elizaga to tie the game.

“It’s always good scoring but the first one for Canada I can’t describe the feeling right now,” said Ricketts ,who ran over in celebration to stands where his father and friends were sitting. “It was kind of sudden. They were arguing and so we played the ball quickly and I was surprised at first. I took a couple of touches and put it in.”

De Guzman explained his mindset on his game-tying assist.

“I realized most of the Ecuadorean players were protesting a long time and I was close to the ball,” said de Guzman. “The first thing I saw was a bunch of our guys to the left at top of the 18. My first instinct was to play it. Even if the referee called it back we would still have the free kick, but once the ball was played, he let the play go. Then Tosaint took the very first touch and finished and we got the tying goal at the right time.”

Despite the jubilation of tying the game and picking up a result in last minute, there was a sense of relief as well. Judging by the post-game reactions it was interesting to hear how some players were pleased by the result while others, including head coach Stephen Hart, felt disappointed with the effort.

“I have to be honest and I don’t think we played very well,” said Hart. “Too many of the players didn’t want to accept the responsibility to keep the ball and to do what was right. Even though at times we played in spurts it was not good enough on the day, but in the end we pulled off the tie.”

Canada did suffer a big blow late in the first half when defender Dejan Jakovic suffered a hamstring injury. He was substituted off and replaced with Andrew Hainault in the 39th minute. He was able to leave the field on his own but had a noticeable limp. Hart admitted that Jakovic’s injury doesn’t look good and that he could now miss the entire Gold Cup.

Sea of Yellow
As is expected in every sporting event, majority of the fans in attendance are usually cheering for the home team. For Canada, that’s not the case. With a huge multicultural population in Canada, particularly in Toronto, many times there more fans cheering for the opposing team than the red and white. On Wednesday night it was no different at BMO Field. Save for one section of Canadian supporters in the South stands, the stadium was as a sea of yellow jerseys, which was an obvious disappointment for the Canadian players.

“Disappointing,” said Dwayne De Rosario when asked about the fan turnout. “At the end of day, hopefully with these results more and more fans come out and show their support. I think going into the locker room every guy was disappointed.”

“It’s a work in progress and hopefully we can fix that,” said forward Simeon Jackson. “As a player it’s not good when you’re coming out and seeing yellow shirts more than red shirts, but thanks to the ones that did come out.”

Canada begins its play in the Gold Cup next week against the U.S. in Detroit. With the low turnout in this friendly, there doesn’t seem to be much optimism that the national team will have a large contingent of supporters for its matches in the CONCACAF tournament.

“I think it’s time that we see a wide support from the Canadian people,” added De Rosario. “A lot of them are first generation but I think it’s time we start supporting our local sports across the board, not only for hockey but for other sports as well, especially for soccer because we have great product out there. For those fans that did come out in the red and white, we definitely appreciate them showing their support and hopefully it can come to Detroit.”

Entertaining Night of Firsts
Although Hart was not happy with his team’s performance on the night, from a fan’s perspective the game was certainly an entertaining one. From the opening kickoff, both teams created chances and took turns playing well in spurts.

For Ecuador, Jaime Ayovi and Michael Arroyo created chances up front early but were unable to get shots on target. Canada had similar luck as well; Jackson and Simpson lacked the ability to make the final pass for a shot on target.

That all changed in the 23rd minute when one quick blast gave Canada the lead. Simpson turned and passed back to Terry Dunfield, who was wide open in the middle. He then took two touches before unleashing a long-range strike past Elizaga to open the scoring. It was also Dunfield’s first goal for Canada.

“First one for Canada, it’s brilliant,” said a happy Dunfield who ran and jumped into the crowd of Canadian supporters along with his teammates. “I’ve been waiting and dreaming of that day for 29 years so it’s pretty special.”

“The fans were going crazy over there and I just wanted to go over there and celebrate with them. It’s a great feeling having ten other guys follow you in as well.”

With the momentum on its side, Canada continued to add pressure moments after the goal. Will Johnson received a cross deep in the box and had a partially open net but misfired with his left foot. Elizaga swatted the ball out of play with his hand for a corner kick. The ensuing corner Canada had another great chance but the header was off target.

In the 33rd minute, Canadian keeper Milan Borjan made a big save on Christian Benitez when the Ecuadorian connected on an Ayovi cross sliding towards goal. A few minutes later Benitez found some space on the left side and fired on goal but Borjan robbed Benitez again. While on the ground Benitez lunged at the ball but that shot was also stopped and smothered by Borjan.

In the second half, Canada gave Ecuador opportunities by not playing tight and gave space in the midfield. In the 62nd minute, Borjan was forced to make a great save off a long-range strike. Then off the ensuing corner kick Benitez was unmarked as he easily headed the ball into the net to tie the game at 1-1.

Benitez, now with Mexican giants Club America, was with Santos Laguna in 2009, and was part of the team that scored two goals in injury time to knock the Montreal Impact out of the CONCACAF Champions League.

Just over a minute later, Arroyo, with plenty of space, finished a brilliant strike from 30 yards out to give Ecuador a 2-1 lead. Borjan who had been playing really well up until that point, can’t be faulted for either goal.

A few minutes later, Atiba Hutchinson put a great through ball ahead to De Rosario, playing his first game at BMO Field since Toronto FC traded him to the New York Red Bulls, but his shot was well stopped by Elizaga to keep his team ahead.

As the clock clicked closer to 90 minutes, the crowd chanted “Ecuador” while drowning out the Canadian supporters attempting their own “Canada” chant.

With Ricketts’ goal in added time ,the crowd booed as the final whistle blew — and continued to boo as police escorted the referees off the pitch. Meanwhile Canada walked over to its large group of supporters in the south stands.

Although this match was a friendly it certainly helped Canada prepare for its opponents in the Gold Cup.

“That was perfect preparation,” said Simpson. “That’s exactly what we’re expecting in the Gold Cup. It’s always going to be a tough game these CONCACAF games with these kinds of referees. For us it’s a little bit difficult. These games prepare us well so it served its purpose well.”

With this match out of the way, Hart has a better idea of his team’s strengths are and what areas his players need to improve. Canada will continue its training camp in Alliston, Ont. over the next four days before travelling to Detroit for the Gold Cup opener on June 7 at Ford Field.