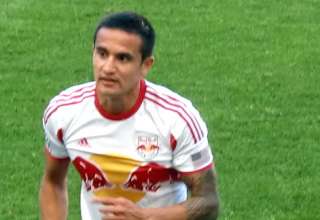 Toronto FC’s late-game breakdowns have officially reached the “macro on the word processor” stage. The Reds saw another (two points/point) slip away after the club suffered yet another heartbreaking (loss/draw) thanks to a late goal in a (INSERT SCORE HERE) (loss/draw) to (INSERT OPPONENT HERE) on Saturday (afternoon/evening) at BMO Field.

The Reds came into Saturday’s match on a string of four consecutive draws in league play, three of which were decided by a stoppage-time goal by the opposing team. New York didn’t have to wait until the extra time, with Tim Cahill finding the back of the net in the 89th minute to put his side up for good and to again leave TFC looking for answers.

“We need to really analyze where things are going wrong because we can’t just keep putting it up to ‘just another one, it’ll never happen again,'” captain Darren O’Dea said. “It’s happening, it happened through last year… It needs to be put right.”

Part of the frustration for TFC stems from the fact that a different player seems to be making a different critical error on a weekly basis. This match’s goat was fullback Ashtone Morgan, whose poor clearing attempt led to a turnover that went to Thierry Henry on the left side, who crossed to a jumping Cahill for the game-winner (and Cahill’s second goal of the match). It was a tough game in general for Morgan, as he and fellow fullback Ryan Richter allowed the Red Bulls plenty of space down the wings.

TFC head coach Ryan Nelsen was clearly upset by the latest result, taking “total responsibility” for the continuing late-game problems but also calling on his players to be more of a leadership role at crucial moments.

“It’s not a jinx, not a hoax or anything like that. We need personalities to go and clear the ball or win the ball,” Nelsen said. “Strong personalities in the back. Every successful team in the world has had one or two defenders that the ball seems to go like a magnet to their head since they want to win it so much.

“Someone has to do it. Whether it’s Darren or Gale [Agbossoumonde] or Ashtone, someone has to take that mantle… That’s what successful teams do. If they want to be good and want to go on, they need to take responsibility. Not talk about it, or gesture but actually do it through actions.”

Toronto almost delivered a bit of late magic itself on Jonathan Osorio’s equalizer in the 83rd minute. New York goalkeeper Luis Robles made a bad mistake by coming far out of the area to try and catch a free kick attempt. Robles was caught up amidst the crowd of players, so once the ball fell to Osorio, he had carte blanche to loft a nice shot from outside the box that went under the bar.

Osorio’s goal almost led to something of a stolen point for the Reds, who would’ve been lucky to get a draw after being badly outplayed in the first half and failing to register a shot on goal until the 62nd minute. TFC’s attack was hamstrung almost from the start when forward Justin Braun suffered an ankle injury in the 12 minute and had to leave the game, bringing a tired Andrew Wiedeman into the lineup.

Nelsen described the game as “by far our worst performance” of the season but noted that some opponents hadn’t deserved points in recent outings against the Reds yet benefited from TFC’s end-game mistakes.

“This is seven points we’ve thrown away,” Nelsen said. “We could’ve had 14 and [been] in a really nice spot.”

The poor finishes and, in this case, the poor start are obscuring the fact that TFC is showing some good form in getting back into these games, said midfielder Jeremy Hall.

“We’ve got to just dig deeper and be more aware or switched on in these last five minutes,” Hall said. “We didn’t play the first half like we wanted to but we were only down 1-0, and we regrouped in the second half and found an equalizer. It’s just these last minutes that are killing us.”

The Reds play their next three games on the road, beginning with Wednesday’s second leg of the Canadian Championship semi-final against the Montreal Impact. TFC holds a 2-0 advantage over the Impact and seem likely to again field a reserve-heavy lineup, especially given the injuries to Braun and Hogan Ephraim, who left at halftime with what Nelsen believed was another ankle injury.

From Montreal, TFC faces a long flight and a short week, as the club is in Colorado on Saturday and then in San Jose on May 8. If nothing else, the busy schedule provides a quick chance at redemption for a team that is eager to put this latest setback behind it.

“There’s a wee bit of inexperience and it shows. It shows in key matters and in key plays,” Nelsen said. “They’ve got to learn from it and address it… As I always say, winning is hard. It’s a responsibility and guys have got to understand that they’ve got to take it.”