December 08, 2022
9 New Articles
Home Global Game CONCACAF Toronto FC ready for anything and everything in Torreon 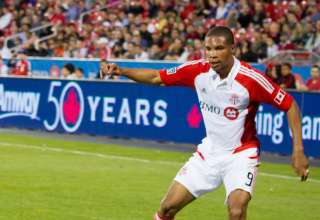 After an intense first leg of the CONCACAF Champions League against Santos Laguna at BMO Field, Toronto FC is not going to rule anything out when it lands in Mexico Tuesday.

A post-game dust-up between the two teams resulted after defender Ashtone Morgan was head butted by Santos Laguna’s Darwin Quintero and the bad blood will surely be carried over. TFC forward Ryan Johnson told reporters after practice on Monday that Santos players were very serious in their warnings on the pitch and in the tunnel after the game.

“Coming off in the tunnel in here those were the words that were said and other words too that I don’t want to repeat but it’s going to be a tough one,” said Johnson, talking specifically of the warnings of war.

Head Coach and Technical Director Aron Winter drew from his playing days and has instructed his players to expect anything and everything from the moment the team arrives to time they leave, especially considering how the previous match ended.

“Yes, it’s normal in those countries,” said Winter. “I think it’s going to start at the moment we land in Torreon. Also, in front of the hotel you can expect everything.

“It’s going to be difficult but you got certain moments…everybody put earplugs in now,” he chuckled.

A few of TFC players have played in Mexico in the past, as well as other Central American countries, and are on the same wavelength as his coach – don’t rule anything out.

“Especially this game you can expect it is going to happen, you know, elbows, late tackles, late kicks, guys stomping on your legs, things like that are going to happen,” said Johnson.

“I’m prepared for it but like I said there’s no need for any broken legs or anything like that. Guys got to know the tackles are coming and keep an eye out for guys coming from your blindside because it’s going to happen, just jump over them.”

Johnson felt that Santos was simply frustrated in the first leg and perhaps a little surprised as to how well Toronto played and that it all came to boiling point by end the match.

“For them to not do that against us here that was frustrating on their part so I’m not surprised to see how the ended. Going down there they’re going to bring the intensity I know it’s going to be a tough one.”

Diver Down
If playing in a hostile stadium and the promise of war wasn’t enough, TFC will also have to contend with Santos players getting favourable calls when diving and flopping around the pitch like fish out of water. History has showed that the refereeing in Mexico is not very kind to opposing teams.

“But you have to be focused on your own things what we want to do and the most important thing don’t go with the intimidation from them or when the cards are going to be hectic, doing stupid things. You can expect everything, everybody have to be prepared for it.”

Santos coach Benjamin Galindo accused American Ricardo Salazar for being “an American refereeing for Americans” after the first leg in what could come across as a harsh accusation against MLS.

“It’s a big concern, I just hope the kind of referee that we get is someone that is going to play the game fair because they are going to take dives and those things are going to happen I know for a 100 per cent,” said Johnson. “I just hope it’s a good referee that’s a fair one. Going down to Central America it’s a toss on what you’re going to get and you just got to hope for the best.”

Goalkeeper Milos Kocic has no doubt in his mind that the referee will have an impact on the game. He stressed that the most important thing is that players should lose their cool and keep calm.

“I know exactly what’s going to happen. If they don’t have results in their hand and if we score a goal, they’re probably going to whine and dive around like they always do and the referee is obviously going to go for that,” said Kocic who has also played in Mexico before.

“I hope it doesn’t go that way. We should just focus on our game, we shouldn’t worry about referee. If it happens it happens, don’t fight with referee because you obviously going to get a card. Just try to be focused on the game and keep your team together. That’s what’s going to help us.”

Despite the tension surrounding the impending match and being winless in MLS, the team was feeling loose in a light-hearted practice and joked around showing that the players are in good spirits.

“It’s going to be a very exciting game,” said Winter. “I’ve got a good feeling to go tomorrow to Mexico.”

“The atmosphere is good, the team is very good. We know what we have to do there. That’s winning the game, take care that we go to the final but we have to prepare ourselves also because the temperament of the culture is going to be crazy there.”

Johnson feels each player on the field needs to bring over the same effort and intensity used in the first leg if TFC hopes to advance to the last round. Santos will be better prepared and will throw everything it can against Toronto. The stakes are higher – win and you’re in the final.

“Things definitely got turned up a level from last week so a lot of pride is going to be on the line for them. They’re not going to want to lose in their home and they’re going to have that kind of fight all the way to the end and we have to match it,” said Johnson.

“We put up a really good fight here and I can expect the same kind of attitude from us down there but it’s going to be one of those things where, individually, each guy in their position has to do their job and if we don’t we’re going to be exposed.”