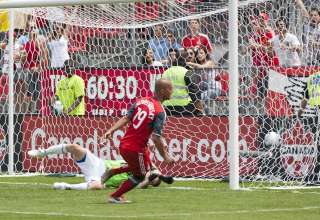 Mikael Yourassowsky’s short stay with Toronto FC will be remembered for one shining moment; the goal that gave the Reds the 2011 Nutrilite Canadian Championship title. His inspired far-post run resulted in the marker that allowed the Reds to defeat the Vancouver Whitecaps in the final.

Unfortunately, that might just be the high-water mark for the Belgian’s North American soccer career. Toronto FC announced Wednesday that the club has waived the 28-year-old midfielder.

Yourassowsky was pushed to the fringes of the team as the squad improved in the second half of the season. And, really, a 28-year-old is too old to be a depth player on an MLS squad. With so many Academy and youth prospects to develop, there is better ways for the club to use its bench space.

When Yourassowsky was on the field, he was best known for being one of the most egregious, ahem, simulation specialists the team has ever employed. In fact, there were times where it was hard to decide which Canadian team had the most blatant pratfaller — was it TFC with Yourassowsky or the Vancouver Whitecaps with Camilo?

Ten minutes later, Toronto took the lead for good. It was Plata again at the heart of the scoring chance, beating Leathers again on the left side and sending a cross in front of the net. The ball bounced to the right side and found Mikael Yourassowsky in position to knock home the Cup-winning strike.

The goal was Yourassowsky’s first in a TFC jersey, but the midfielder was more interested in what the title meant for his side rather than reflecting on his personal achievement.

“You want the team to win. if the team is winning, that’s the most important thing for me,” Yourassowsky said. “It’s not so much who is scoring or who is making the production. I think we have a good group, we have some good qualities in the group and I think with a little bit more confidence we can make really good things happen.”