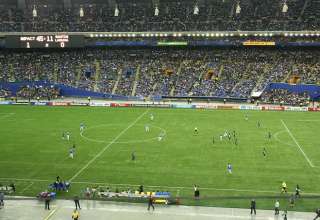 The Montreal Impact won’t be moving out of the Olympic Stadium for good in 2012.

The Impact will play at the Big O until the Stade Saputo renovations are done during the 2012 campaign. But the team struck a deal with the Olympic park, which guarantees games will be played at the Big O in 2013, 2014 and 2015 as well. These games, two or three a year, “should” (the word used in Montreal’s press info) include home openers.

Really, this kind of deal follows suit to what Toronto FC is doing with Rogers Centre. With the MLS season being stretched, now going from early March to a final in December, there are more chances for games to be played in inclement weather in inhospitable northern climes. TFC is playing its early March CONCACAF Champions League quarter-final indoors rather than weatherproof BMO Field. And, in years to come, if an event is too big for BMO Field — or the weather forecast is too dismal — the games can be moved inside.

Now, Montreal is making itself available for home games in early March for the next four seasons.

And, with MLS now giving the right to host MLS Cup to a team that’s actually in the final, there is always a chance, that Montreal could get the big game. And trust me, there was some fear in MLS offices about playoff/MLS Cup matches in Montreal in November and December.

So, this deal is just as much an insurance policy as it is a chance to create buzz. Sure, anyone who was in Olympic Stadium in 2009 when the Impact faced Santos Laguna in the CONCACAF Champions League quarter-finals will never forget the atmosphere of being in that building when it’s packed to the rafters. I surely won’t.

But, romanticism aside, the Impact helps the MLS schedulemaker by not having to go on the road for the first month of the season because it’s too cold to play at Stade Saputo, or at least too cold to draw decent crowds. (New England in March! In the snow! I can see the scalpers weeping…)

Pragmatism disguised as romanticism — that’s how to describe this move. But in the end, it will help the Impact.